Is it safe to travel to Indonesia after the recent earthquakes? 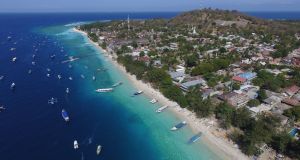 As humanitarian groups respond to the aftermath of the earthquakes, which have destroyed infrastructure and left thousands homeless, is it safe to holiday in Indonesia?

The Department of Foreign Affairs advises anyone travelling to the southeast Asian country to exercise a “high degree of caution.”

The department’s travel advice states “all non-essential travel to Lombok, and the northern and eastern coasts in particular, as well as the Gili Islands, should be avoided until transport and other infrastructure returns to normal”.

Their warning said “the capacity of the Indonesian emergency and rescue services, and local authorities, to deal with large natural disasters is limited”.

The department “strongly recommends” anyone travelling to the area should purchase full travel insurance, to cover overseas medical costs in the event of an injury - the insurance will also cover any evacuation or legal costs.

Indonesian authorities have assured tourists there is no tsunami or heightened earthquake risk.

Authorities have warned people to avoid buildings that were visibly damaged by the recent earthquakes, and the string of aftershocks.

After the main earthquake hit on Sunday, the Irish embassy said all Irish tourists had been safely taken off the affected islands. There were 50 Irish tourists on the Gili Islands and around 60 on Bali.

Indonesia is located in a part of southeast Asia known as the ‘Ring of Fire’, as it sits along an active seismic strip in the Pacific Ocean.

Seismic movements in the area can create severe earthquakes, and potentially tsunamis. Up to 90 per cent of the world’s earthquakes take place along the Ring of Fire.

A catastrophic tsunami hit the country on St Stephen’s Day in 2004, killing over 120,000 in Indonesia alone.

What should I do when an earthquake hits?

There are several common pieces of advice for how to stay safe when a large earthquake hits.

If you are inside, stay inside until the shaking stops. If possible it is advised to try and get under a desk or table, or against an interior wall.

You should drop to your hands and knees, and cover your head to protect against falling objects.

Stay away from exterior walls and windows, and clear of large pieces of furniture that could topple over.

If you are outside when an earthquake hits, stay clear of buildings, as debris or glass may fall. Be wary of power lines overhead breaking and falling onto the ground.

If you are by the sea when a large earthquake hits, one of the signs a tsunami may be about to hit is the tide will quickly go out, in which event you should seek to get to high ground immediately.

In the aftermath of an earthquake hazards may include fires or gas leaks.