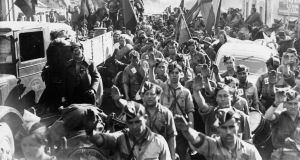 The Fifth Division of Replacements arrive and give the word that the troops of Navarre have come to fight in the Spanish Civil War, circa 1936. Photograph: Three Lions/Getty Images

The only Irishman known to have fought with the Basque army during the Spanish Civil War was remembered at an event in Dublin this weekend marking the 80th anniversary of the destruction of Gernika.

Dubliner Jack Prendergast fought with the Basque Army - Euzko Gudarostea - against fascism but his story was largely forgotten. It has now been documented by Dublin historian Sam McGrath in a publication - “Gernika Then and Now”.

Mr McGrath said Prendergast was born on May 11th, 1911 and grew up at Dock House, Spencer Dock in North Wall where his father, Thomas, was a lock keeper. He went to UCD in 1930 to study engineering but left after a year to join the civil service.

When the Spanish Civil War broke out, Prendergast was drawn to the plight of the Basque people and he travelled to the Basque country where he joined the militia of the Basque Nationalist Party (PNV), which was then incorporated under a unified command of the Euzko Gudarostea.

Mr McGrath said Prendergast rose to the rank of captain and “fought with the 8th company of the Irrintzi battalion under the command of the Chilean born nationalist, Gabino Artolozaga which participated in almost all the important actions and battles of the Biscay Front”.

Prendergast explained his motivation in a letter to The Evening Herald in 1939 when he revealed that he had not fought with the International Brigades but as a soldier in the Basque Army as he wanted “to fight with the Basques until the last inch of Basque territory has been taken”.

By 1939, Prendergast was back in Ireland, having been captured by Franco’s forces at Santona in Cantabria where he was imprisoned before he was taken to Bidosa on the French border and expelled as “an undesirable alien’, according to Mr McGrath.

Afterwards Prendergast suffered from depression and he took his own life after shooting dead his girlfriend Una Ennis while out walking in Clontarf in April 1942.

Mr McGrath found an inquest report where Prendergast’s father, Thomas, said his son had suffered from depression and pleurisy since his return from Spain. The jury returned a verdict that he was “on unsound mind” when he shot Ms Ennis and himself.

Veteran socialist republican, Bernadette McAliskey, paid tribute to the Gernika 80 Committee for organising the event to remember the suffering of the Basque people in the Spanish Civil War and for producing ‘Gernika Now and Then’ and recording the stories of people like Jack Prendergast.

Over 50 healthcare workers repatriated from India to Ireland 20:51
Church of England rules Irish inscription on grave stone must have translation 20:44
Less than half of fathers entitled to paternity leave took time off work 20:35
Big drop in Garda use of Covid-19 powers despite bank holiday weekend 20:17
A third of arrivals in Ireland are not answering phone for self-isolation checks 19:43

1 Luke ‘Ming’ Flanagan bares his bottom half to European Parliament
2 Coronavirus: Eight further deaths and 10 new cases reported in the State
3 Gardaí investigate Dublin Black Lives Matter protest over Covid-19 rule breach
4 A third of arrivals in Ireland are not answering phone for self-isolation checks
5 Trump turns to bible for photo op as DC burns around him
Real news has value SUBSCRIBE