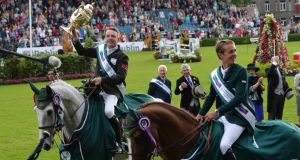 The Irish team won its first Aga Khan Trophy for three years at the Dublin Horse Show at the RDS on Friday.

Wunderkind Bertram Allen’s mount Romanov clipped a vertical in the first round and Cian O’Connor’s Good Luck did so in the second, but otherwise it was a flawless performance in front of an appreciative home crowd.

Greg Broderick achieved two clear rounds on Mhs Going Global. Darragh Kenny, after a clear round on Sans Soucis Z, did not even have to jump in the second.

The lowest fence proved to be the biggest hurdle. Last year’s winners the United States were in a good position when Charlie Jayne’s mount Valeska unseated him and sent him head first into the water.

It was O’Connor’s 100th cap for Ireland and his third Nations Cup triumph. He had a fence in hand. Good Luck knocked a fence, but horse and rider kept their nerve.

When the trophy was won he took off his cap and saluted the grandstands. The sun made a brief appearance during the event after a heavy shower had earlier threatened to make the premier day of the annual show a bit of a washout.

Ireland’s domination of the whole week to date has brought the feelgood factor back to the RDS, though it will all count for nothing if Olympic qualification is not secured at Aachen later this month.

Among those watching the Irish triumph was Eddie Macken, a veteran of many equestrian glory days . Indeed, he represented Ireland 27 times in the Nations Cup. “I know what Friday in Dublin is all about,” he said.

Now based in Vancouver, Canada, as a trainer, Macken relishes his visits home, though his tan gives an indication as to why he is not inclined to move home permanently. “I get to follow the sunshine,” he says.

Macken hopes the present Irish team can be the household names he and his contemporaries were back in the late 1970s, but he admits the competition now is much stiffer.

“Back then we didn’t have Rory McIlroy. We didn’t have all that fanastic coverage of sport on TV. When I was a kid, the highlight of the summer was to wait for the horse of the year show in Wembley to be televised.”