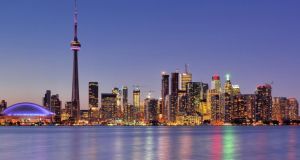 Many Irish people planning to emigrate to Canada this year were left disappointed last night after the first allocation of 3,850 working holiday visas were snapped up in less than 10 minutes.

The application system for the two-year International Experience Canada (IEC) visas, which allows Irish people aged 18-35 and their children to live in the country for up to two years, opened at 8pm Irish time yesterday.

Unsuccessful applicants have taken to social media to complain about the system, with many saying they had been in the process of uploading documents when the quota ran out.

A total of 10,700 IEC permits have been allocated for Irish people this year under an agreement signed between the Canadian and Irish governments last week, up from 6,350 in 2013.

Because demand was so high for the IEC visas in 2013, with the quota taken up within four days, it was decided to release the 7,700 working holiday visas available under the scheme in two rounds this year.

Applicants who were unsuccessful last night will be able to apply for a second round of 3,850 working holiday visas at a later date to be announced by the Canadian Department of Immigration and Citizenship.

Some 3,000 visas ringfenced for young professionals under the IEC programme were made available online on Tuesday, but just 49 had been taken up by Irish people by the end of the day yesterday.