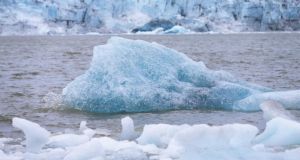 Rising global temperatures may not pose the only threat to polar ice caps. Research involving an Irish scientist is exploring how warmer and more turbulent seas may be eroding glaciers from below.

NUI Galway scientist Dr Brian Ward took equipment designed and manufactured at his university to the far north last month to test the force and temperature of such wave action.

The international team, which undertook rifle training in case of polar bear attacks, headed out on skidoos to place motion sensors on the Norwegian archipelago of Svalbard.

The nine sensors were calibrated to measure the propagation of waves originating from the ocean, and then calculate the “damping” of waves by the ice, Dr Ward said.

“The measurements we took came from a combination of very sensitive motion detectors that were placed at different locations on top of the sea ice, and pressure sensors that were located at different depths through holes drilled into the ice,” he explained.

The team set up camp at Templefjorden, a fjord about 60km north of Longyearbyen, the archipelago’s capital.

They hoped to track particularly large waves, created far out at sea and with sufficient energy to move right in under the fjord.

They captured a small storm and the wave action was recorded on the sensors.

Dr Ward is the only Irish scientist on the international project, funded by the Norwegian Research Council. The project is measuring the behaviour of waves in both ice and oil.

Oil is known to have a calming effect on seas. “Aran islanders used to take a can of oil out rowing with them in case they got caught in heavy conditions,” said Dr Ward.