Irish resident among 202 people to have assisted suicide in 2013 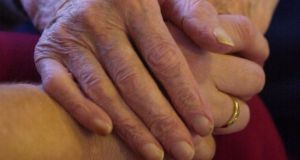 One Irish resident was among more than 200 people who chose to end their lives at the Dignitas clinic in Switzerland last year. Photograph: Alan Betson/The Irish Times

One Irish resident was among more than 200 people who died by assisted suicide services last year, according to the Swiss- based organisation Dignitas.

According to the organisation, 202 people were recorded as having an “accompanied suicide” last year, the highest number since its foundation in 1998.

The Irish resident brings to eight the number of people known to have travelled from Ireland to take their own lives since the organisation began offering assisted suicides in 1998.

Silvan Luley of Dignitas said: “It does not matter whether six, five or seven patients from Ireland or any other country have travelled to Dignitas. Everyone who is forced to leave his home, his bed, his country in order to have access to a legal, self-determined, dignified and accompanied ending of suffering is one too many.

“Every single one is a proof of the indifferent and careless approach of politicians and other authorities who deny access to this basic human right – and thus are directly responsible for causing a lot of suffering due to clandestine suicide attempts, of which the large majority fails – with all dire consequences.”

‘Very brave woman’
Referring to the multiple sclerosis sufferer Marie Fleming who brought an unsuccessful right-to-die challenge to the Supreme Court last year and who died at her home in Arklow, Co Wicklow, last month, Mr Luley said: “She was a very brave woman, and so is her family. There should be more people like her who fight the legal path. If politicians are too inhumane to move, then, sooner or later, the judges, if necessary the European Court of Human Rights, will decide over their head,” he said.

Euthanasia or assisted suicide is legal in four European countries – Belgium, Luxembourg, the Netherlands and Switzerland. However, only Switzerland allows non-residents with a terminal illness to travel to the country to avail of an assisted suicide.

Dignitas’s literature says a person wishing to have an assisted suicide must have a terminal illness and/or an unendurable incapacitating disability, and/or unbearable and uncontrollable pain. They must also be of sound judgment and possess a minimum level of physical mobility sufficient to self-administer a drug with which they end their own life.

Dignitas have facilitated the assisted suicides of almost 1,700 people from 42 countries over the past 16 years.

Almost half of the 1,698 recorded assisted suicides related to people from Germany, with 242 Britons making up the second largest cohort, or 14.3 per cent.

Although suicide ceased to be a crime in the Republic of Ireland in 1993, the law states the act of suicide must be achieved without assistance. Under Irish law “aiding, abetting, counselling or procuring the suicide of another” carries a penalty of 14 years’ imprisonment.

Dignitas: in numbers
Number of assisted suicides recorded by Dignitas in 2013 by country of residence