Irish Protestants ‘must feel free to talk about their past’ 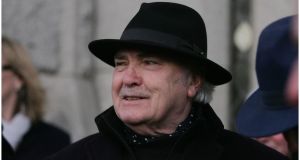 Eoghan Harris has said that as long as Irish Protestants living in the Republic feel unable to talk about their past, they are not truly free. File photograph: Bryan O’Brien/The Irish Times

As long as Irish Protestants in the Republic feel unable to talk about their past they are not truly free, the veteran journalist and polemicist Eoghan Harris told a packed gathering for the screening of his documentary about the treatment of Protestants in west Cork, An Tost Fada.

An Tost Fada (The Long Silence) tells the story of the Irish-speaking Church of Ireland clergyman Canon George Salter and how his father had to sell his Dunmanway farm in April 1922, amid IRA threats, and move to the UK before returning to live in Castletownshend, where Canon Salter was born in 1925.

The documentary, first broadcast by RTÉ in 2012, was shown on July 29th as part of the inaugural West Cork History Festival, in Skibbereen, before an audience of about 100 people, followed by a debate involving Mr Harris and the film’s producer and director, Gerry Gregg.

The killing of Protestants was highlighted by the late Peter Hart in his 1998 book, The IRA and Its Enemies: Violence and Community in Cork 1916-1923, in which he alleged the IRA had engaged in a sectarian campaign with the shooting of 13 Protestants in the Bandon Valley in April 1922, after the Truce.

But Mr Hart’s thesis and that of An Tost Fada was challenged by the Sinn Féin member and former Skibbereen town councillor Donnacha O’Shea, who said it ignored a British intelligence report that acknowledged Protestant farmers in the Bandon Valley passed information to the British.

Mr Harris angrily rejected Mr O’Shea’s suggestion that Protestant farmers passed information to the British military or that it somehow justified their killing by the IRA, and he argued that any spies who betrayed the IRA in west Cork were most likely members of the IRA.

“How could Protestants be spies? What would they know? The only people who would know anything about the IRA were members of the IRA. They were the spies, as they were in the Provos. All the spies in the IRA in the 1916-1921 period were most likely members of the IRA.”

Mr Harris said those who were challenging the central thesis of An Tost Fada, which was based on Canon Salter’s experience of what happened to his family during the War of Independence, were in denial of the fact that there was a sectarian element to the conflict in west Cork.

“Why are you putting footnotes on everything? There’s a man there telling his life story. He cannot be gainsaid by anyone. He speaks for himself. Why are you trying to smear and muddy the waters of what he has told? You are a Shinner – that’s why you are doing it,” he responded to Mr O’Shea.

“I don’t know what the point is of trying to allege Protestants were spies. George [Salter] had this on his mind all his life, and all he wanted to do is bear witness . . . This was kept as a kind of cancerous secret for 90 years, and George has lanced a boil, and I believe it has done nothing but good.”

Mr Gregg said that Michael Collins had said that what happened in the Bandon Valley killings was an outrage while the republican Erskine Childers, himself a Protestant who took the Anti-Treaty side, had described what happened in west Cork as “foul sectarianism”.

The former RTÉ journalist Jerry O’Callaghan, who has made documentaries on Tom Barry, Dan Breen and Ernie O’Malley, said he had no doubt that Canon Salter was telling the truth when he recounted his family’s experience but it didn’t reflect what he himself experienced growing up in Enniskean.

“The film is very good, and I have no doubt about what Canon Salter says. I believe what he says, but that certainly doesn’t describe the general attitude where I grew up, and I would say that film generalises from the particular case of Canon Salter and it overstates the case.”

Members of Aubane Historical Society handed out flyers before the screening, condemning the documentary as “gravely incompetent history as propaganda”. The film has been corrected for some errors since its first screening, after a complaint to RTÉ by Tom Cooper of the Irish National Congress.