Hotel rooms listed at over €500 a night during Galway Races 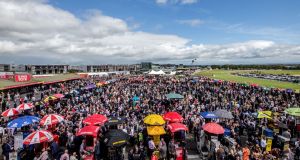 The crowd at the Galway Races in 2015. Photograph: James Crombie/Inpho

One-night stays in three-star hotels near the Ballybrit racetrack, which hosts the Galway Races this week, were priced at more than €500 on booking websites on Sunday, although some of the highest prices listed were dismissed by hoteliers as inaccurate.

The website hotels.com listed a room in the Nox Hotel on the fringes of an industrial estate near the racetrack on Thursday night at a price of €699.50.

The hotel’s own website, however, said it was fully booked-out on the night of Ladies’ Day, traditionally the busiest day of the wildly popular race meeting, and a spokeswoman expressed both concern and surprise at the high prices being quoted on third-party sites .

Availability across the city is extremely limited for the Races, valued at €54 million to the local economy, with many two- and three-star hotels as well as B&Bs and self-catering apartments charging more than €200 for a single night.

The high prices prompted local Fine Gael councillor and former Galway mayor Padraig Conneely to express concern. “Prices of this level are just wrong. It is overkill and it is opportunistic to try and extract as much money as possible from people visiting our city,” he said.

“It would be terrible to think we were going back to the days of the Tiger economy. Sky-high prices give the city a bad name, and while hoteliers might make money in the short term, we should all be thinking of the future and what price levels like this will do for the reputation of the city.”

Meanwhile, a big security operation, including a ban on backpacks and large handbags, gets underway in the Galway today ahead of the 148th annual race meeting .

Security measures have been stepped up in the wake of recent terror attacks in the UK and across Europe, and racegoers have been asked to arrive early and to expect delays due to extensive bag and physical searches.

Racecourse manager Michael Moloney said he was looking forward to a record-breaking meeting with crowds of more than 160,000 and prize money of more than €2 million.

Mr Moloney said enhancements have been carried out, including a new festival village with new bars, big screens, a betting area and live music.

“If the weather is anyway on our side we will be up with last year’s figures,” he said. “Thankfully looking at the forecast now we are going to avoid the heavy rain and I would be very positive that we are heading the right direction.”