Eamonn Driver was at wheel of car that crashed, killing Irish man and woman 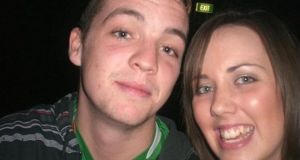 Colm Reilly and Kiara Duncan, Irish backpackers who were killed in a car crash in Perth in 2007

An Irish man has been sentenced to almost three years in jail in Western Australia over a 2007 car crash that killed two other Irish people who were passengers in his car.

Eamonn Driver (31), from Slane, Co Meath, was speeding in a Toyota Corolla when it hit a kerb, turned on to its roof and collided with an oncoming car being driven by a 63-year-old woman in the Perth suburb of Bedford on October 31st, 2007.

The two passengers in Driver’s car, Colm Reilly (20) and Kiara Duncan (20), both from Kentstown, Co Meath, died in the crash.

Driver’s hatchback car was carrying six passengers at the time of the crash, he had been drinking beforehand and he had just run a red light, Perth’s district court heard.

Driver’s lawyer told the court that “momentary inattention” when he turned to tell his passengers to keep quiet caused the crash.

The court heard Driver disregarded pleas from his passengers to slow down. In sentencing, Judge Richard Keen said Driver had displayed egregious disregard for the safety of himself and others and that a “dangerous combination” of factors led to the crash.

Mr Reilly died instantly in the collision, while Ms Duncan died in hospital three days later. The woman in the other car escaped without serious injury.

Driver was taken to hospital with a shattered pelvis, but returned to Ireland for the funerals of Mr Reilly and Ms Duncan before being charged with any offence.

Judge Keen accepted Driver was remorseful, had empathy for the victims’ families and was haunted by the crash, but he said offenders needed to know there would be little leniency for such crimes.

“There is far too much carnage on our roads,” he said.

The judge noted that, in a statement to the court, Ms Duncan’s mother did not forgive Driver and was struggling with her loss.

The court heard Driver kept his distance at Ms Duncan’s funeral but sat with Mr Reilly’s family during his funeral because they were close friends.

A warrant for Driver’s arrest was issued when he failed to appear in a Perth court in 2009 after being charged in his absence.

His reason for failing to appear was that he was recovering from a motorcycle crash in Ireland and could not travel.

An extradition order was then sought with the help of the Western Australia department of public prosecutions, the federal attorney general’s office and Irish authorities.

After a lengthy process, on July 24th last Minister for Justice Alan Shatter ordered Driver to surrender to Australian authorities. Police officers from Western Australia’s crash investigation unit travelled to Ireland to bring him to Perth. Driver entered an early guilty plea when he appeared in court last August.

He has been sentenced to two years and 50 weeks in prison and will be eligible for parole after serving half his sentence.