Management have faced campaign of intimidation blamed on dissident republicans 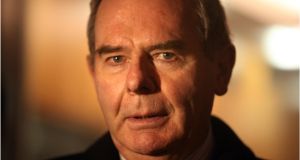 Relations between Seán Quinn on one side and the American and Irish investors in the firm comprised of former Quinn Group assets on the other have deteriorated over the last year. File photograph: Dara Mac Dónaill/The Irish Times

Irish investors in a firm comprised of units from Seán Quinn’s former Fermanagh-based group have strongly backed local management, despite criticism from the one-time billionaire.

“To date, we believe that the management team have brought stability to the business. Production, turnover, profit and employment have all risen substantially in the last 15 months. We have not and will not deviate from our prime objective,” investors Ernie Fisher, John McCartin and John Bosco O’Hagan said in an email obtained by Fermanagh newspaper the Impartial Reporter.

The email had been sent to Liam McCaffrey, chief executive of Quinn Industrial Holdings Ltd.

Local management and a number of employees, including Danish contractors working on a wind farm in Co Monaghan, have been subjected to a campaign of intimidation recently. The campaign has been blamed on dissident republicans.

“We note with sadness, the sabotage, defamation and intimidation directed at the business and its senior management over the last few months,” the email said.

“We discussed the transaction with Seán Quinn as we progressed it and having reviewed the documents, he supported the deal,” the Irish investors told Mr McCaffrey, a former deputy at the Quinn Group.

Relations between Mr Quinn on one side and the American and Irish investors on the other have deteriorated over the last year, in the face of Mr Quinn’s determination to regain control of the businesses he once owned.