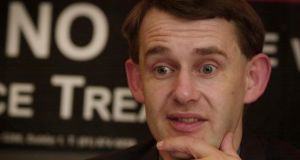 The new National Party is in favour of racial profiling and says there needs to be a complete ban on Muslims coming into Ireland.

Justin Barrett, a former activist with the militant anti-abortion group Youth Defence said that “there needs to be check of all people coming into this country. Most people, at a quick glance, you can tell they are no threat.

“Profiling is something that police through out the world use as an instrument of law and order. It was attacked by liberals, but its absence in France led to murder and mayhem.

“Every one worries about upsetting people. We’re trying to save lives. The families who lost loved ones in France are more upset. Profiling protects people,” he told Cork’s 96FM on Friday.

Earlier in the morning he told Radio Kerry that there needs to be a complete ban on muslims coming into Ireland.

Mr Barrett who said the National Party would be putting forward candidates in forthcoming elections, also said the party is opposed to gay marriage but not gay people.

He said that what takes place in private between two consenting adults was nobody’s business, but that marriage equality had taken the issue into the public sphere.

On being asked about funding for the new political party he said that it was funded by donors, none of whom had donated more than €2,500.

When asked how many members the National Party has, he declined to give exact details, but when pressed said there were “considerably more than a few hundred”.

Mr Barrett also said that the party did not have a Facebook page and was having technical difficulties with its new website. This followed a complaint from a caller who said she had been described as a “left-wing troll” when she communicated with the National Party Facebook account.

Mr Barrett also said that the National party was not a “Nazi party” and did not “hate” any one.

Asked about his previous membership of Youth Defence, Mr Barrett said: “I was fired by them. I’m no longer a member. They didn’t like that I didn’t like some of the things they were saying.”

Earlier this week, the Merrion Hotel in Dublin cancelled an “information meeting” by the party which was due to be staged there.

Mr Barrett and Irish Cattle and Sheep Farmers’ Association treasurer James Reynolds were due to speak at the cancelled event.

The National Party claims that it wants to “remind the political elites and the general commentariat . . . of the extent to which the promise presented by the Proclamation of the Republic remains unfulfilled”.

It cited the Irish economy’s “unsustainable debt”, Ireland’s “unrestricted policy of immigration to the point of population displacement” and “the blood lust of extremist groups to remove the equal right to life of the unborn child” in its release.

It also describes the European Union as “dictatorial” and “federal”, and decries the growth of multiculturalism in Irish society.