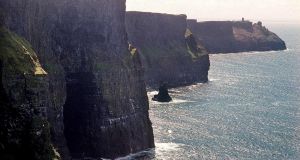 Tourism on the island of Ireland had its best year in 2016 with growth of 11 per cent and earnings of €5.4 billion. However, the industry is set to become a victim of its own success with capacity problems restricting growth to an estimated 1 per cent in 2017.

Tourism Ireland, which promotes tourism across the island, said 2016 looked set to become the “best year ever for overseas tourism to Ireland”. However, Tourism Ireland chief executive Niall Gibbons warned there were “sustainability issues” in Dublin and at big attractions which would limit the island’s ability to sustain such rapid growth.

In the Republic, Dublin’s Guinness Storehouse was experiencing visitor numbers of 1.6 million per year, while outside the capital the Cliffs of Moher in Co Clare were attracting 1.2 million people a year. There was definitely a “sustainability issue” about such rapid growth, he said.

Special efforts would be made to attract Chinese tourists. This would include measures such as more Chinese-friendly information and tour guides. He said Brexit would probably mean a reduction in British visitors, but the North may benefit from being a sterling area.

Air access improved this year, with more seats laid on by Aer Lingus, Flybe, CityJet, Iberia Express and Air Canada Rouge. An estimated 537,000 direct, one-way airline seats to the island of Ireland were available each week during the summer of 2016, a 9 per cent increase in capacity over the summer of 2015.

Referring to capacity problems, particularly in Dublin, Minister of State for Tourism Patrick O’Donovan said many regional areas had not reached the same levels of business as the capital, which he said was becoming congested.

Mr O’Donovan said the Government had asked local authorities to compile tourism development plans, with specific targets which he said his department would oversee.

In a move which he compared to the Department of Environment’s oversight of county development plans, he said the Department of Tourism would oversee local authority tourism plans for adherence to the national strategy.