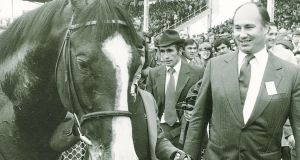 The Aga Khan with Shergar after the Irish Sweeps Derby.

The kidnapping of the Derby winner Shergar was the work of the Provisional IRA, a former figure in the organisation has claimed.

Kieran Conway, who was an intelligence officer at the time, said the IRA had never publicly acknowledged it was behind the kidnapping of the horse on February 8th 1983, but “clearly it was. I didn’t personally meet anybody who objected to us kidnapping a horse.”

The mystery of the disappearance of what was then the most valuable racehorse in the world is the subject of a new BBC documentary Searching for Shergar by presenter Alison Millar.

Her documentary reiterates the view first advanced by the former IRA informer Sean O’Callaghan that Shergar was shot because his kidnappers could not control a thoroughbred racehorse.

O’Callaghan alleged that Shergar is buried on the land of an IRA veteran from the 1940s in Aughnasheelin, Co Leitrim.

In the documentary, Mr Conway, the author of the book Southside Provisionals: From Freedom Fighter to the Four Courts, said he rejoined the IRA at the time of the hunger strikes in 1981.

There had been a “massive influx of support”, he remembered, for the IRA at the time, but a shortage of cash. As a consequence, the IRA began a kidnapping strategy starting with businessman Ben Dunne in 1981.

Mr Conway described the kidnapping of Shergar as a “good stroke” and one that made logical sense at the time.

“He was an extremely valuable horse, the Aga Khan [Shergar’s owner] was known to be an extremely rich man. He would not be concerned about the political implications of giving the IRA money unlike perhaps a southern businessman. I had no difficulty with that operation at all,” he told the documentary.

Jim Fitzgerald, the retired head groom at Ballymany Stud in Co Kildare, was kidnapped along with the racehorse on February 8rd, 1983.

He told the programme that 35 years later he could remember what happened “like yesterday”.

“We were in the sitting room and next thing a knock comes at the door and these gangsters came in with guns,” he said.

“They brought me to the stable where the horse was and I put him [Shergar] in the small horsebox to take him away.”

They never told Mr Fitzgerald who they were or where they were going. He was taken away in a van. He said two of the three men who kidnapped him were “gangsters, not a bit nice”. He feared he would become another of the disappeared.

They later let him out near Kilcock, about 40 kilometres from Ballymany Stud.

Searching for Shergar will be broadcast on BBC 1 Northern Ireland at 9pm on Thursday June 7th.