‘In the end Gerry Conlon won - the victory was his’ 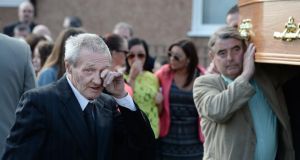 One of the Birmingham Six, Paddy Hill wipes a tear as the coffin of Gerry Conlon is carried into St. Peter’s Cathedral for his funeral Mass in Belfast today. Photograph: Charles McQuillan/Getty Images

Gerry Conlon was a “victorious human being” who “defeated a mighty foe”, his solicitor and friend Gareth Peirce told mourners at his funeral Mass in St Peter’s Cathedral in west Belfast today.

Ms Peirce at a moving and affirmative ceremony spoke of the “demons” that possessed Gerry Conlon, one of the four who were wrongly convicted of the 1974 IRA bombings at Guildford which claimed the lives of five people.

Speaking at the end of Mass Ms Peirce recalled the powerful impression Mr Conlon made when he stormed out of the Old Bailey a free man in 1989. “When he angrily, angrily stated the truth it had an extraordinary effect and made the world understand that innocent men and women had been buried alive in English prisons year after year and it had been allowed. Indeed it had been organised to happen. It was no accident,” she said.

“So when he shouted out ‘I am an innocent man, my father was innocent, the Maguires are innocent and the Birmingham Six’, he set something in motion that forced the rest of us, the rest of the world, Britain, to hold a mirror up to ourselves and see precisely who we were and what we had done,” added Ms Peirce.

She also recalled how even as he approached death, with an oxygen mask over his face, Mr Conlon spoke passionately about the need for action on other miscarriages of justice and how he was deeply concerned for people still in Guantanamo Prison and in prisons on these islands and elsewhere.

“Life dealt Gerry a pretty poor hand. He was a gambler and gambling was in his DNA but with a poor hand he made a magnificent fist of it. If anyone thinks that this is someone who was beaten or terrified and pushed down forever, that wasn’t so,” she said.

To loud applause she concluded, “We can say, with all the adversities, in the end Gerry Conlon won - the victory was his.”

That comment reflected the positive mood of the occasion, a mood enhanced earlier at the Mass when one of the members of the English group Alabama Three sang a powerful version of Will the Circle Be Unbroken as the crowd sang and clapped along.

Ms Peirce and the chief celebrant Fr Ciaran Dallat also referred to how later in life Mr Conlon, who is survived by his partner Alison, daughter Sara and sisters Anne and Bridie, found some happiness.

Fr Dallat said Mr Conlon lived a life filled with great pain but that “in the last 10 years he found some peace for himself”.

Fr Dallat, who anointed Mr Conlon shortly before his death, told mourners he was amazed at his “readiness”. He said Mr Conlon told him on his death bed, “I am just waiting for my master to come and take me home”.

He also referred to how Mr Conlon died just three weeks after his diagnosis. “He had done an awful lot of suffering in his early life, he didn’t need to suffer any more. He was ready to go,” added Fr Dallat.

He spoke too of how Mr Conlon blamed himself for the death of his father Guiseppe who died in prison in 1980 after he was arrested, and with the rest of the so-called Maguire Seven was wrongly imprisoned on bomb-making charges. He was arrested when he came to London to try to help his son.

“And in the Master’s house, the place that Jesus has prepared in heaven, we trust that Guiseppe and Sara are there and he will truly be at peace at last because Guiseppe will reassure him, as his mother tried so often, that it wasn’t his fault - it wasn’t his fault, other people got it wrong.”

Also present was Brian Shivers, whose conviction for the 2009 dissident republican murders of two British soldiers in Antrim was overturned last year. Mr Conlon had tried to raise awareness of the medical needs of Mr Shivers, a cystic fibrosis sufferer, while he was in prison.

The burial took place in Milltown Cemetery after Mr Conlon’s coffin was carried along the Falls Road.