‘I travelled on the Hill of Howth tram; I would love to relive that memory’

New report estimates it would cost €6.7m to reopen line which closed in 1959 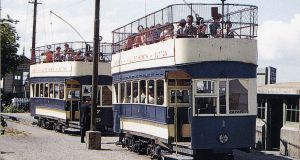 Passengers aboard the Hill of Howth tram before its closure in 1959. Photograph: National Transport Museum Collection

In May 1959, CIÉ announced it would phase out the famous trams in Howth, Co Dublin, and replace them with modern buses.

“For a number of years, the tramway service has been kept going only by the constant patching of the equipment,” it told its customers, heralding the end of an era in public transport. “This is now virtually worn out.”

Over the years that followed, the tramlines became overgrown and sealed off from traffic by yellow bollards; their purpose reassigned to walkers. Punctuated by housing estates and swallowed in places by new roadways, they faded into local memory.

However, the sight of trams crawling their way from Howth harbour to its summit and popular walking routes, could be set to return.

Bolstered by local support and a continuing growth in visitor numbers to the north Co Dublin village, a recent study into the viability of reinstating the tramlines has brought this vision a step closer.

Although a necessary initial multimillion euro capital injection appears to have temporarily derailed ambitions, Independent Fingal councillor and tram supporter David O’Connor has promised the report is “not lying on a shelf gathering dust”.

The detailed 100-page study, produced by Atkins consultants for Fingal County Council, outlines a number of potential routes – the original is all but impossible to replicate.

The problem lies with the finances. According to estimates produced by Atkins, an initial capital spend of about €6.7 million would be required for a piece of infrastructure that would probably run at a deficit.

Local interests are not entirely in agreement on the figures, believing they may be more positive, but the report estimates the tramline could, at worst, lose €326,000 a year and, at best, return a profit of €72,000.

These numbers are based on research of other, broadly similar operations elsewhere. In Howth the tramline would be expected to attract about 64,550 users a year with 10 daily services using original restored trams, each carrying 73 passengers.

Given the shifting landscape over six decades since the service was decommissioned, a number of route variations have been suggested and explored, but in the main, local support favours a return of trams running between Howth Dart station and the Summit pub, a jump-off point for thousands of tourists navigating circuitous cliff walks.

“It would mean more if the tram ran from the train station right up to the Summit car park,” says Jim Kilroy of the Howth Transport Museum, who has spent his life refurbishing and safeguarding the original vehicles that would, ideally, be rented back into service. “They need the trams that we have: real, genuine trams.”

Despite the financial barriers, Mr Kilroy, as with others, believes the return of the line to be quite realistic. It would require the service of local volunteers but, as he knows, these are likely to be in plentiful supply.

The council, which commissioned the Atkins report in 2016, says its proposals are feasible but not “currently being considered due to the significant capital cost and predicted potential ongoing requirement for revenue subvention”.

However, with tourists filling Howth year round, others are sceptical of the report’s estimates and believe the service could be self-financing.

“If we get the right circumstances,” says Cllr O’Connor, a proponent of the idea, “we could have a tram back in Howth. There is very good local support for it.”

When it closed in 1959, there were seven electric trams in Howth, providing the only local transport. They moved from Sutton train station to the west of the peninsula (now a Dart station) to Howth station, over its hill, a journey of about 8km.

The council still owns most of the land on which it operated. Discussions with Fáilte Ireland, the tourism body, told the report authors the tram proposal could be “very attractive” and was in line with its strategy for Dublin.

The route outlined by Atkins as the best choice has been identified as having minimal impact on traffic, offering a “wow” factor and giving users sweeping views of the coast.

Local councillor Cian O’Callaghan says, “the number of visitors are increasing all the time” but that the capital cost outlay would still need to be sourced.

“There is interest there, there is good will. People are asking could it be viable and could it be self-financing,” he says, bringing the journey of this tram saga back to its inevitable starting point: finance.

“Generally there would be strong support for some form of the old tram to be reinstated.”

Mr Kilroy agrees. He would love to see the trams he has spent decades tending to brought from the recesses of the Transport Museum and out on to shiny new rails.

“It would be a dream come true,” he says, considering the picture. “I travelled on the hill of Howth tram; I am old enough to remember. I would love to relive that memory.”