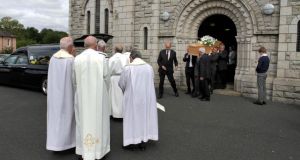 Hundreds of mourners gathered at St Anne’s church in Shankill, Co Dublin, on Saturday for the funeral of prominent tax practitioner Don Reid, who had served as chairman of The Irish Times. He died unexpectedly in the garden of his Mayo home last week.

“I’m quite certain he prayed for release, but he didn’t consult us about it,” his brother, Fr Des Reid, told the congregation. Fr Reid was the chief celebrant, together with nine other priests and Dr James Moriarty, former bishop of Kildare and Leighlin.

Mr Reid’s youngest son, Ronan, said he did not die of a heart attack, but of a broken heart, referring to the fact that Nano Reid, Mr Reid’s wife of 56 years, died in April. His father, he told the congregation, “observed with real sadness that his home had now become a house with mum’s passing”.

Mr Reid spoke movingly of a father who “was a gardener par excellence, a DIY expert, a raconteur, an avid sports follower. He was the strongest, most honest and smartest man I ever met.”

Burial afterwards was to Shanganagh Cemetery.