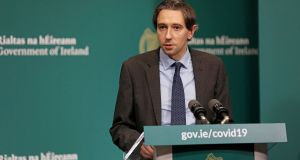 The Department of Health said the Minister, Simon Harris, wanted to have specific arrangements put in place to oversee the volume and type of patients seen in the private hospitals and the costs involved. Photograph: Julien Behal/PA Wire

Effective State control over the bulk of Ireland’s private hospitals will come to an end in just over a week’s time. The arrangement was broadly welcomed when first announced in response to the Covid-19 pandemic, but has since proven to be a costly and controversial one.

The Cabinet decided in late May not to take up an option to extend the agreement for a further two months, but said it would look at other ways to make use of private hospital capacity in future.

The agreement represented the State’s largest single investment in its effort to manage coronavirus, with the Cabinet hearing that the total cost over three months could be close to €340 million.

Documents published in recent days by the Department of Public Expenditure confirm that the HSE wanted to retain the 2,000 beds, operating theatres and intensive care and other facilities available under the deal.

The documents show that from early on there were concerns among senior officials about the extent to which the private hospital facilities were being used as the anticipated surge of Covid-19 cases did not materialise.

They state that on April 16th “all parties expressed concern in relation to the utilisation of private hospital capacity”.

“Maximising the use of facilities available to the HSE is of the utmost importance in the current crisis; it was acknowledged, however, that the Government had agreed to the arrangement on the basis that there would be a significant and urgent requirement for additional capacity.

“In this regard, it was confirmed there was activity taking place in the private hospitals and public patients had moved across.”

The Department of Health had written directly to HSE chief executive Paul Reid a week earlier urging that the private capacity be effectively and fully utilised in the interest of patient care and with immediate effect. It said Minister for Health Simon Harris wanted to have specific arrangements put in place to oversee the volume and type of patients seen in the private hospitals and the costs involved.

The minutes say the group on April 24th noted that there “appears to be excess unused capacity in public and private hospital system at present, attributable to both delays in finalising an agreement with private consultants, and to lower-than-projected levels of activity in acute hospitals”.

The group heard that the clinical opinion “indicated a continuing need to retain this level of capacity”. However, the Department of Public Expenditure argued that “data would be needed to support a case for continuing retention of high levels of capacity beyond the minimum period, e.g. in scenarios where the levels of Covid-19 might be effectively suppressed”.

The group heard on April 30th that occupancy of private hospitals at that stage was estimated to be running at 33 per cent “but there is opportunity in May and June to increase usage subject to public health advice and clinical and operational judgement”.

The group was also told that the occupancy rate at the CityWest hotel complex, which the HSE also took over to increase capacity during the pandemic, was “currently low”. Minutes from the following week note “a growing number of questions regarding the occupancy rate of CityWest Hotel at the time, and potential alternative uses for the facility”.

Two weeks later, on May 21st, the HSE told the group that “on balance” it was “inclined toward the view that some level of supplementary private hospital capacity should be maintained and that the continuation of the current arrangement, for some or all of the private hospitals, until end-August would be appropriate”.

The Department of Public Expenditure pointed to “the need for evaluation of alternatives for securing needed capacity; and that differentials in capacity usage between various types of private hospital would be expected to have a bearing upon considerations of value-for-money and upon the final recommendations”.

The Government has separately instructed the HSE to engage with the private hospitals to secure ongoing access to the facilities in collaboration with the National Treatment Purchase Fund (NTPF) to address essential needs including delays in public patients obtaining treatment. These talks are under way and this week the HSE is expected to meet with doctors’ representatives before the Cabinet considers the issue again.

The Offload: Springbok heavyweights heading for the Pro14