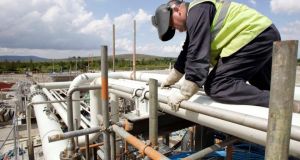 The Health and Safety Authority has referred the findings of its investigation into the death of a German national in the Corrib gas tunnel almost two years ago to the Director of Public Prosecutions (DPP).

The authority confirmed to The Irish Times yesterday that it has completed its investigation into the circumstances surrounding the death of Lars Wagner (26) in the tunnel under construction in north Mayo on September 8th, 2013.

Mr Wagner, who was single and from Offenburg in southern Germany, sustained fatal head injuries when a compressed air pipe reportedly came free.

He was a mechanical fitter attached to the maintenance support crew for Herrenknecht, the German sub-contractor which built the tunnel-boring machine hired for the final section of the Corrib gas onshore pipeline under the Sruwaddacon estuary.

In a statement, contractors Wayss & Freytag BAM Civil Joint Venture expressed their sincere condolences to Mr Wagner’s family. An inquest into Mr Wagner’s death has not yet been held.