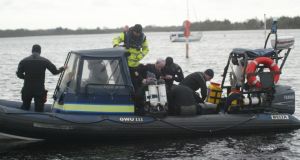 Hopes for the safe return of a missing fisherman are fading as searchers on Lough Ree, Co Roscommon concede their operation may now be one of recovery.

The missing fisherman, named locally as father-of- three Daryl Burke (30), was one of three men who set off in a small Dory boat from Hodson Bay at about 3pm on Thursday.

Mr Warnock died in hospital, where Mr Trimble is in a stable condition, after the RNLI rescued the pair from the lake when their boat capsized.

Local man David McEnroe was the last person to speak to the men before they left the pier. He tried to dissuade them from going out. Speaking at Hodson Bay yesterday, he said, “One man has lost his life and there is still another man missing. It is still very raw with everybody at the moment”.

“I was the last person to speak to them. They said ‘we are here, there’s three of our friends up on one of the islands, we are going to get the rest of the stuff up to them, we are going to camp there as well’,” he recalled.

“They had a lot of gear on the boat and the design of the boat itself mixed with the weather conditions and the load that was on it, it wasn’t a good mix here yesterday. It just rang alarm bells with me here and that’s why I was on the phone before things actually went south for them.”

Motioning to an area just south of the main search location, Mr McEnroe said: “I knew by the time they got around that heading for Yew Point that’s when disaster was going to happen. That’s why I phoned so early.”

Mr McEnroe met Mr Burke’s wife and members of the Portadown Pikers angling club who gathered in Hodson Bay yesterday. “I had a brief word. I introduced myself earlier on; she’s a lady. It is a very sensitive time and very sensitive moment for her,” he said.


Visibility
Lifeboat operations manager with Lough Ree Lifeboat Station Damien Delaney said “the search went on yesterday from about 3 o’clock, or half-three, until dark last night when we had to stand down because of visibility.

“We resumed this morning at about 8 o’clock . . . the weather has started to deteriorate, as you can see. The forecast is for it to get up to gale force with heavy rain, that may hamper the search ability.”

Search teams scoured an area of about five square miles with boats, jetskis, sub-aqua units and the Coast Guard helicopter. Searchers also walked the shoreline, while sub-aqua units focused their efforts on a half square mile of the lake.

Despite the extensive search, there was no sign of Mr Burke. When asked if it was now looking like a recovery operation, Mr Delaney conceded “slowly it is beginning to look that way”.

Such a search would be “mainly an underwater operation,” he explained.