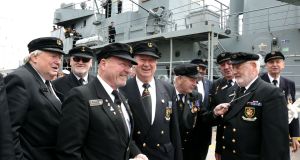 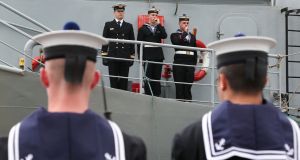 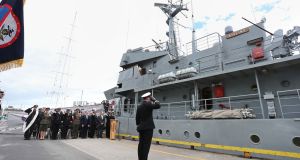 His grandfather, and his uncle, both named Jimmy O’Mahoney and from Cobh, had worked as welders on the hull – nicknamed ‘the last of the Mohicans’ as it was the final ship in its class to be built in Verolme.

Over the next 36 years, the “long Éireannach” would clock up some of its 628,000 nautical miles - equivalent to 32 global circumnavigations - on several key events, which were recalled in Galway docks on Wednesday when the ship was officially decommissioned.

It was involved in the capture of the IRA gun-runner Marita Ann in 1984, and the response to the Air India Flight 182 explosion over Irish air space in 1985, and under its first commander, Lieut Cdr Peadar McElhinney, it broke up a fishermen’s blockade of Dublin Port in 1982 without a single arrest.

Later that same year, the ship recovered nets and wreckage from the Louth fishing trawler Sharelga which was sunk by a British submarine in the Irish Sea.

With its ‘battle ensign’ lowered to the roll of a drum, the decommissioning ceremony was witnessed by Minister of State for Defence Paul Kehoe, deputy mayor of Galway Cllr Pearse Flannery and both current and past members of its crew.

The last and only time the battle ensign could have flown would have been during the pursuit of the fishing vessel Sonia in October 1984, after it tried to ram the ship during an attempted inspection, and shots were then fired across its bow.

That incident occurred only three weeks after it had worked with Lieut Cdr Brian Farrell and crew of the LÉ Emer on apprehending the Marita Ann .

Among the five men apprehended with arms on board the fishing vessel off the Kerry coast was current Sinn Féin TD Martin Ferris, who served a ten year sentence.

In 1995, the ship was involved in the prolonged search off the Donegal coast for the fishing vessel Carrickatine which disappeared with six crew on board.

A year later, in 1996, it assisted the Japanese tuna boat Taisei Maru after it lost five crew in a gas poisoning incident at sea.

The ship is twinned with Galway, and its crews have raised funds for University Hospital Galway’s children’s ward.

It was in Galway docks that the Naval Service’s first female commander, Lieut Cdr Roberta O’Brien, took the helm of the LÉ Aisling in 2008.

Tributes were paid by Lieut Cdr Doherty to current and former crew of the ‘happy ship’, when the ship’s ‘jack’ or Naval Service flag was struck and presented to the coxswain Chief Petty Officer Coleman O’Driscoll.

A photo of the vessel was presented to Capt McElhinney, who retired in 1999 after 40 years of service – and who had first signed off for it at Verolme on behalf of the State.

Although its sister ship, LÉ Aoife, is working with the EU Frontex security operation in the Mediterranean under the Maltese flag, the Aisling is expected to be put up for sale.

Its replacement, the €70 million LÉ William Butler Yeats , is due to be delivered from its Devon shipyard to Cork harbour later next month.