Historian warns of limits on freedom of expression in universities 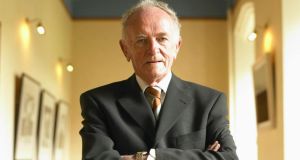 Prof John A Murphy: “As someone who, as a student and a member of staff, experienced real censorship of the old-fashioned kind, I would deplore any return to censorship under some other guise”

The historian and former independent senator, Prof John A Murphy, has warned that a new puritanism is creeping into Irish universities.

Prof Murphy said it was important that students were not limited in their freedom of expression but he feared that puritanism among students and some well-meaning staff was as limiting as the religious conservatism that existed in University College Cork (UCC) in the mid 20th century.

Prof Murphy was speaking as he was honoured by UCC on Tuesday with the unveiling of a bust to mark his 90th birthday and his contribution to academic life at the university.

He recalled how, as a student in UCC in the 1940s, anyone wishing to speak on a particular subject in a public forum had to submit their address in advance to then UCC president Alfred O’Rahilly for approval and, while those days were thankfully gone, he did detect a new puritanism emerging.

He said this was instanced by an outcry in UCC in January which led the student centre to remove signs for coffee bearing slogans, such as “What’s your cup size?”, accompanied by illustrations of women, amid accusations of sexism.

“I begin to worry when there is so much ‘concern’ among certain members of staff about that kind of bawdy send-up of advertising about coffee and bra cups. There was outrage among the new puritans who called for the monitoring of students, ‘monitor’ if you please, the same word as ‘censor’.

“As someone who, as a student and a member of staff, experienced real censorship of the old-fashioned kind, I would deplore any return to censorship under some other guise – in fact, I would be an absolutist, in terms of student rights; I would let them do virtually everything.”

Prof Murphy, who began lecturing in the Department of History in 1960 and became Professor of Irish History in 1971, also expressed concern about the current emphasis within Irish universities on the international ranking system which was highly selective and ignored the importance of teaching.

“I’m glad somebody has questioned the university rankings as being less than complete even though they are a kind of obsession now, whether you get in the first or second 100, but unless, and until, they include lecturing/teaching as a criterion of university excellence, I don’t take them all that seriously.

“Without teaching and lecturing , we are essentially talking about research institutes, not a university – immemorially universities have included teaching and the traditional academic going back to the Middle Ages should have both teaching and learning at the core of his experience.”

UCC president Dr Michael Murphy said it was noteworthy that it was 72 years ago that Macroom born Prof Murphy had entered UCC as a student.

“By my estimate, he has been on campus for some 62 years and, in that time, he has made much of the history here as well as writing it – he is quite simply an institution within the institution and that is one of the reasons we are honouring him here this evening in the Aula Maxima.

“The second reason is that without John A there would be no formal professional record of the institution and if a university doesn’t know its own story, how it came to be in this way, it doesn’t really have a sense of itself. John A provided that to UCC and he’s worthy of celebration.”

A warm tribute was also paid to Prof Murphy by his former colleague and historian Prof Tom Dunne who noted how he had always championed the connection between college and city and how he came to embody and celebrate UCC as part of the Cork community.