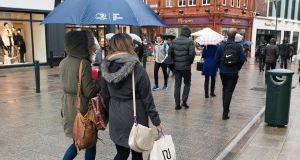 Ireland may be on course to have the mildest December on record, according to the latest weather statistics.

To date Valentia Observatory in Co Kerry has recorded a monthly average temperature of 10.5 degrees, surpassing the record of 10 degrees set in December 1921.

It has been so warm that early daffodils have been blooming in west Cork since mid-November and have not stopped.

Brian Perrott of West Cork Daffodils based in Bandon, Co Cork has been sending his Rijnveld’s Early Sensation daffodils to the shops, but there is little market for them because the public do not associate the flower with Christmas.

“This weather is pretty screwed. It has been 12 or 13 degrees every day, temperatures we normally get in February,” he said.

“We’re in new territory. We have no idea what this weather is going to do to our main crop. If I was a dairy farmer, it would be equivalent of having a few dead calves,” he said.

Dublin Airport and Phoenix Park are also very close to their historic highs. The mean temperature at the Phoenix Park of 8.3 degrees is just 0.1 degrees below the record high for the month recorded in 1857.

Climatologist Aidan Murphy stressed that the second half of December is normally colder than the first half of the month and it is too early to say if any records will be broken. However he said “these are exceptional temperatures for the time of year”.

The second half of the month is also looking like it will be extraordinarily mild.

Friday and Saturday are forecast to have temperatures of between 13 and 14 degrees, well above normal for the time of year.

The unseasonably mild conditions mean there is almost no chance of a white Christmas as the long-range forecast suggests temperatures of between 10 degrees and 12 degrees for Christmas Day in Ireland.

As recent floods show, it has also been exceptionally wet . “It is not unusual for mild conditions to be wet. The general current of air is coming from sub-tropical regions and that is the primary air mass that has been over the country over the last few weeks,” Met Éireann forecaster David Rogers has said.

The cause of the exceptionally mild weather has been a southerly air mass dragging up mild, humid air from the Sahara.

Elsewhere Britain’s Met Office has forecast that global temperatures in 2016 are likely to be as warm or even warmer than in 2015, which will be the warmest on record. “This forecast suggests that by the end of 2016 we will have seen three record, or near-record years in a row for global temperatures,” it said in a statement.