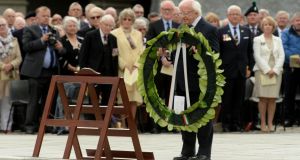 President Micheal D Higgins laying a wreath on behalf of the Irish people during the National Day of Commemoration at the Royal Hospital Kilmainham. Photograph: Cyril Byrne/The Irish Times 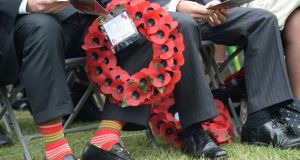 A man holds a wreath at the annual Ceremony of Remembrance, organised by the Royal British Legion, Republic of Ireland, at the National War Memorial Gardens in Islandbridge on Saturday. Photograph: Dara Mac Dónaill/The Irish Times 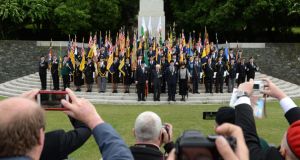 The colour party poses for a photograph after taking part in the annual Ceremony of Remembrance, organised by the Royal British Legion, Republic of Ireland, at the National War Memorial Gardens in Islandbridge on Saturday. Photograph: Dara Mac Dónaill/The Irish Times

Ireland’s war dead and Defence Force personnel who died while serving on UN missions were remembered in a formal military and religious ceremony at the Royal Hospital Kilmainham in Dublin.

The annual National Day of Commemoration was also marked across the State in ceremonies in Cork, Kilkenny, Limerick, Sligo and Waterford.

The events follow the commemoration organised by the Royal British Legion in Ireland on Saturday at the National War Memorial Gardens, to honour the dead of the first and second World Wars.

Current and former members of the Defence Forces, and the next of kin of those who died in past wars or on UN service attended the Kilmainham ceremony, as well as ex-servicemen’s organisations and relatives of the leaders of the 1916 Rising.

They were joined by President Michael D Higgins, who laid a wreath;Taoiseach Enda Kenny; members of the Government and the Council of State; TDs; Senators; almost the entire diplomatic corps including their defence attaches; members of the judiciary and representatives of political parties from Northern Ireland.

The Army No 1 band, with military pipers conducted by Lieut Col Mark Armstrong, played throughout the ceremony and accompanied soprano Cara O’Sullivan.

On his arrival, President Higgins reviewed a guard of honour of the 7th Infantry Battalion, Cathal Brugha Barracks, led by Capt John Moody.

The Taoiseach then invited the religious representatives to lead an act of commemoration.

Rabbi Zalman Lent, representing Ireland’s Jewish community, prayed: “May the efforts of those we honour today be transformed into the blessing of peace throughout the world.”

Representing the Russian Orthodox Church, Rev Fr Mikhail Nasonov prayed for the repose of the souls of “the servants of God, Irish men and Irish women, who have fallen asleep and that they may be pardoned for all their sins, both voluntary and involuntary”.

Moderator of the Presbyterian Church Rev Ian McNie read from the Book of Ephesians in the bible while Imam Hussein Halawa of the Islamic cultural centre sang verses from the Quran in Arabic and prayed in English. “Permit peace and prosperity to prevail all over Ireland, O Lord. Save this country and its people from all the evil plans, O Lord,” he said.

After the prayers, the Taoiseach invited the President to lay a wreath on behalf of the people of Ireland.

A minute’s silence was then observed. It ended with the firing of a cannon outside the quadrangle of the Royal Hospital and the Last Post was sounded by trumpeters and drummers.

The national flag, which had been at half-mast, was hoisted to full-mast and the Reveille was sounded.

The ceremony concluded with the singing of the national anthem and a flypast by four Air Corps planes.