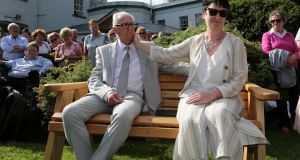 Patric and Geraldine Kriégel at the planting of a tree and the unveiling of bench and plaque in memory of their murdered daughter Ana, in the grounds of the Leixlip Manor Hotel, on Saturday. Photograph: Crispin Rodwell

As the sun came out over the garden of the Leixlip Manor Hotel on Saturday afternoon, Geraldine Kriégel told a crowd of more than 200 people that her daughter was there in spirit.

Just over a year ago, Ana Kriégel was murdered in an abandoned farmhouse only a couple kilometres away from where Mrs Kriégel stood. She had turned 14 not long before she was killed. She had a passion for singing and swimming, and liked laughing, dancing, and being with her family.

Mrs Kriégel clutched her husband Patric’s hand as she expressed her gratitude to those who came to watch a white cherry blossom tree being planted in her memory. A wooden bench with a plaque stating “Forever loved, forever cherished, Ana Kriégel” was also unveiled.

“Ana loved coming here on her school holidays,” Mrs Kriégel told the crowd. “She is here in spirit now. Let’s come back here and spend a few minutes with her.”

Despite spending the last few months sitting through a long and painful murder trial, the Kriégel couple seemed immensely peaceful. The crowd applauded as they each picked up a shovel to gently toss soil on the newly planted tree in the hotel’s garden.

Mr Kriégel looked surprised when he saw the memorial plaque, and glanced at nearby family members in gratitude. He and his wife held the plaque as they sat down on the new bench to let photographers take pictures. He joked that he wished the bench had been there before so he had somewhere to sit when he visited the garden.

The Leixlip Manor Hotel was chosen as the location for Ana’s memorial tree because it was one of her favourite places when she was younger, Mrs Kriégel said. Ana and Patric used to have lunch there and Mrs Kriégel said Ana was eager to return to the hotel when she had a free afternoon.

“Ana used to love coming here with Patric for lunch during the school holidays and was disappointed when it closed,” she said.

“Shortly before she died she discovered it had reopened as Leixlip Manor and she was delighted and said to Patric: ‘Papa we need to go to the hotel for lunch again like we used to’.

“She never made it for lunch, but she’s here in spirit now. So let’s remember that and come back and spend a few moments with her from time to time.”

Majella Kernan-Finlay, the hotel’s manager, said the idea behind the tree and the bench was to give people a place to go and think of Ana. “They can come and watch this beautiful tree blossom in her memory,” she said. “It will provide a private and peaceful place for neighbours, friends, and family to go and remember her.”

Ms Kernan-Finlay spoke to reporters as she tried to get the Kriégels into the hotel for a private reception. The couple generously gave their time by thanking each guest who approached them with hand squeezes, kisses, and hugs. Some attendees appeared visibly upset, but the Kriégels remained calm and composed.

A close relative of Ana’s who did not wish to be identified said the last year had been “extremely hard” for the family. “Moments like this can help us celebrate Ana’s life,” she added.

Angela Devlin, a close friend of the family, said the event was emotional but necessary. She said the tree meant Ana was “back now”. “She got the sun out for us too,” she added.

While the occasion was markedly public, the family’s deep bond was evident in their private moments. A young girl stood near the Kriégels holding a bunch of white balloons which she released one by one into the air after the ceremony. A woman standing nearby told the young girl to let them “fly high” as a piper started to play. When they had all floated into the sky, the young girl began to cry.

Seeing this, Mrs Kriégel moved away from the crowd to console her, whispering “it’s okay”. Clutching the piece of paper which contained the words she had spoken in honour of Ana, Mrs Kriégel smiled as she held the young girl close to her chest.

The couple also thanked the community for the “wonderful” support shown to them since their daughter’s death.

Ana’s body was found in an abandoned farmhouse in Lucan, Co Dublin, in May 2018 after she had been reported missing by her parents.

Two 14-year-old boys were found guilty earlier this month of her murder.

Both boys have been granted anonymity due to their age, and were referred to as Boy A and Boy B throughout the trial. Boy A was also found guilty of aggravated sexual assault.

The teenagers are the youngest convicted killers in the history of the Irish State.

Ana was born in Russia in February 2004, and adopted by Mr and Mrs Kriégel at the age of two-and-a-half.

She grew up in the Leixlip area in Co Kildare and in many ways was a typical teenage girl who loved to listen to music, sing, wear fake nails and use her various social media accounts.

She was a strong swimmer and gymnast.

At 5ft 8in, Ana was tall and strong, a “typical Siberian”, as her mother described her.

But the first-year student also suffered horrific bullying and was endlessly tormented in the months leading up to her death.

She was targeted on social media through her Snapchat and YouTube accounts.

On the first day of the murder trial, Mrs Kriégel told the court her daughter was very vulnerable and despite looking older than her 14 years, she was a “child on the inside”.

“She was very immature. She looked so much older, but inside she was younger, far younger than her youth,” Mrs Kriégel said.

After the verdict, Mr Kriégel told media their daughter Ana was “our strength”. Her mother said: “Ana was a dream come true for us, and she always will be. She’ll stay in our hearts forever loved and forever cherished. We love you, Ana.” – additional reporting PA