Hearing into planned €220m upgrade of N20 in Cork concludes 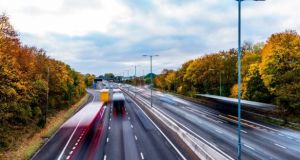 A proposed €220 million upgrade to a motorway of the N28 Cork to Ringaskiddy road is essential to bring further investment in the pharmaceutical industry, Cork Chamber has claimed.

A proposed €220 million upgrade to a motorway of the N28 Cork to Ringaskiddy road is essential to bring further investment in the pharmaceutical industry in the Lower Cork Harbour area, the Cork Chamber business group has said.

Michelle O’Sullivan, the group’s policy and research executive, said the creation of a motorway would enable further growth in the pharma business in Ringaskiddy, where an estimated 5,000 of the 25,000 people employed nationally in the sector are based.

She told an An Bord Pleanála hearing into the proposed road upgrade that companies in the area were investing more than €500 million in expanding their businesses, which would lead to hundreds of new jobs. She said an improved road was needed to ensure the safety of those commuting.

Ms O’Sullivan said the upgrade would facilitate the move of the Port of the Cork from the City Quays and Tivoli, and this would free up the Cork Docklands area for development.

“Without investment in the M28, the route will continue to experience growing traffic volumes along the existing road, worsening current commuter and traffic bottlenecks with negative impacts on both the economy and on local communities,” she said.

However, local residents in Rochestown, Ringaskiddy and other affected communities have expressed concern about the proposed route.

Sylvester Cotter, a former county councillor from Rochestown, said it appeared as if Transport Infrastructure Ireland and Cork County Council were intent on “bulldozing the M28 project through the Mulcon Valley in Rochestown without any regard for the health or quality of life of the residents”.

Mr Cotter said that those opposed to the suggested route were fully committed to the idea of Ringaskiddy becoming a Trans European Transport Network but believe a more suitable route would involve providing a link via Cork Airport on the southern hills overlooking Cork city.

“This alternative route would be complementary to the upgrade of the N20 Cork-Limerick road to a motorway servicing the Mid-West,” said Mr Cotter.

He said that sending Port of Cork traffic through the Mulcon valley was an accident waiting to happen given the steep decline from Carr’s Hill down to Rochestown. Mr Cotter said he dreaded to think what would happen if an articulated lorry with a hazardous or explosive substance was to crash.

The hearing, which heard submissions from up to 100 witnesses over the course of 12 days has concluded. An Bord Pleanala has set a December 21st deadline for a decision but the deadline is not expected to be met given the volume of submissions for consideration.