Healthcare workers could be asked for fee towards new childcare scheme 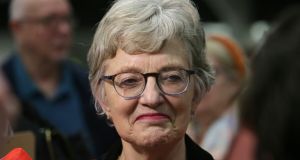 Minister for Children and Youth Affairs Katherine Zappone. She is set to announce details of the scheme on Thursday

Frontline healthcare workers could be asked for payments towards a proposed new childcare scheme expected from Government this week.

Under the proposals currently being examined by the Department of Children and Youth Affairs, the department would pay childcare settings such as creches a fixed amount for the service, which would see workers provide care in the homes of health professionals.

It is expected that the fee will be charged on a household basis, meaning multiple children will be covered by the same fee, although this element is yet to be finally signed off.

Minister for Children and Youth Affairs Katherine Zappone is set to announce details of the scheme on Thursday. The scheme is not yet finalised, and is subject to change.

Officials from her department briefed stakeholders, including trade organisations and sectoral representatives, on Tuesday evening.

It is understood the scheme will see childcare workers taken off the Government’s Covid-19-specific wage subsidy scheme in favour of the payment funded partially by the department and partially by parents.

The plan is for the same childcare worker to provide the service, and that it be available seven days a week.

It comes as the department begins to examine strategies for the gradual resumption of childcare services outside the home. Under the Government’s phased plan for reopening, creches, childminders and pre-schools will reopen from June 29th. Initially this will be for the children of essential workers, but then for all other workers “on a gradually increasing basis” from July 20th.

Suggestions that children will initially return to childcare for one day a week have been played down, with concerns that children may not benefit from such an arrangement.

Different scenarios are under examination, based on the assumption that fewer children will return to childcare, at least initially.

The department’s two main objectives will be to increase wages in the sector while also reducing the level of fees paid by parents using the Irish system, which are among the highest in the OECD.

However, it is unlikely that could be achieved under the current budgetary allocation, with a figure needed closer to that currently being spent by the exchequer to support the sector through extraordinary schemes and wage subsidies.

Officials briefed sectoral representatives on take-up of its enhanced wage subsidy scheme, which sees top-ups made to the general Government scheme up to 100 per cent of a wage equivalent to €38,000 per year. About 83 per cent of childcare providers have now signed up for the programme, the meeting was told.

The officials also said that concerns around parents still being asked for fees, as well as the immediate decision of some creches to lay off significant numbers of workers, were the driving reasons for the establishment of the special wage subsidy scheme, and the suspension of other subsidy payments to the sector for the duration of the crisis.