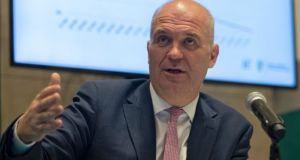 Deaths from coronavirus in nursing homes and other residential care facilities have risen to 819, or 61 per cent of all 1,339 Covid-19 deaths, the Department of Health has said.

Included in this figure are 706 deaths associated with nursing homes residents, or almost 53 per cent of total deaths.

The number of deaths in residential care facilities has risen by 84 since last Thursday, the bulk of which, some 76, occurred in the country’s nursing homes.

The increase in the number of Covid-19 clusters – each defined as two or more cases – in nursing homes has slowed.

The National Public Health Emergency Team at the department said that there were 394 clusters in residential care facilities, including 229 in nursing homes, an increase of two in a day.

The figures show the vast majority of residential care facilities cases (84 per cent) and nursing home cases (83 per cent) recover from the virus, though the death toll among elderly nursing home residents stands at more than three times the mortality rate among the general population.

The mass testing of thousands of nursing home residents and staff is 91 per cent complete, Dr Colm Henry, chief clinical officer of the HSE, told the week-daily NPHET briefing on Tuesday.

Testing had been carried out at 527 of the 582 public and private nursing homes in the State, he said, and that the remainder would be completed “in the coming days”.

The overall rate of positives tests had fallen to 3 per cent showing that the number of nursing home cases was “reassuringly lower than we would have been concerned about initially”, he said.

Dr Henry told the briefing that there have been almost 400 HSE staff redeployed to nursing homes, including “well over 100 to private nursing homes” including about 80 to 85 mostly smaller homes that are “facing difficult challenges”.

Tadhg Daly, chief executive of Nursing Homes Ireland (NHI), which represents private nursing homes, said the mass testing was “the right thing to do” but there had to be a contingency plan to help homes find replacement staff for those who test positive and have to self-isolate for 14 days.

Mr Daly’s group welcomed comments by Taoiseach Leo Varadkar during his Late Late Show interview last Friday suggesting alternatives to nursing home care such as older people staying at home “for much longer” or having community homes instead of big, 150-bed nursing homes.

NHI said on Tuesday that successive governments had ignored calls for enhanced planning of care services for older people for years.

Mr Daly said the group had been calling for a forum on long-term care for a decade and that the NHI had made representatives to Mr Varadkar when he was minister for health from 2014 to 2016.

“For too long, the care provided by nursing homes has been at arm’s length and under-resourced, and the requirement to address fundamental issues placed on the long finger,” he said.