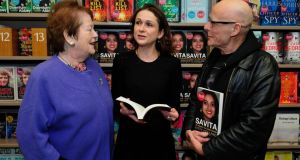 Irish Times Journalist Kitty Holland (centre) pictured with her father, Eamonn McCann, and Mary O’Rourke at the launch of her book ‘Savita: The Tragedy that Shook a Nation’ in Dubray bboks in Dublin tonight. Photograph: Aidan Crawley.

Former minister for health Mary O’Rourke said she had been overwhelmed by a new book detailing the life and death of Savita Halappanavar.

Speaking at the launch of the book, Savita: The Tragedy that Shook a Nation, Ms O’Rourke said there was much in the book she had been “struck by”.

“It is not a book with flourishes. It is a very practical book. I thought it was a done with a paucity of language – which I would approve of – but the facts were all there. Absolutely, starkly there, and that was all that mattered.”

The book is written by Irish Times journalist Kitty Holland, who one year ago broke the story of Ms Halappanavar, who died at Galway University Hospital following a catalogue of errors with her care.

Ms O’Rourke also said the story of Ms Halappanavar had humanised the issue of abortion for many in Ireland due to her husband Praveen’s decision to publicise the fate of his wife rather than protect her anonymity and that of her extended family.

“Here was a real person – a beautiful, young, married, professional woman who was in love and from a good background in India,” said Ms O’Rourke. “She had come to Europe to make her life with her husband. Suddenly there is a real person and she had a name.

“We suddenly thought this was happening to somebody we knew a lot about. That was so telling. We didn’t really know who the anonymous women were – but we knew who Savita was.”