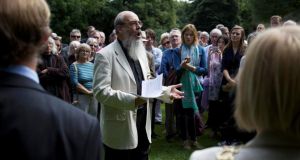 The Government has been urged to take a lead role in an international campaign to ban nuclear weapons.

Speaking at a memorial for the victims of the atomic bombings of Hiroshima and Nagasaki during the second World War in Dublin’s Merrion Square, Patrick Comerford of the Irish Campaign for Nuclear Disarmament said “a moral stance by Ireland can be effective” in bringing about change.

He pointed to the Naval Service’s mission to help migrants in the Mediterranean as an example of this, saying that actions can “save lives and can challenge the unwillingness of others to act”.

The memorial this year marked the 70th anniversary of the nuclear attacks on Japan on August 6th, 1945, which killed an estimated 140,000 people.

The ceremony, which was held by the Irish Campaign for Nuclear Disarmament (CND), was attended by Críona Ní Dhálaigh, Lord Mayor of Dublin, and Naoki Yoshimura, first secretary of the Japanese embassy.

Mr Comerford told those in attendance the “devastating effects of nuclear weapons on Hiroshima and Nagasaki seven decades ago provide a clear rationale for negotiating a ban”.

Mr Yoshimura echoed the call for nuclear disarmament on behalf of the Japanese government.

“As the only country to have ever suffered atomic bombings, Japan is making efforts to achieve a world [that is] free of nuclear weapons.”

Helen Martin, of Donnybrook, Co Dublin, said she was inspired to attend the event after visiting Hiroshima while travelling in Japan two years ago.

“A feeling came across us when we arrived. It was horrific, I’ll never forget it.”

Ms Ní Dhálaigh told the crowd of some 80 people that Irish citizens “need to consistently keep pressure on our world leaders to pursue nuclear disarmament”.

The ceremony also featured performances by Irish and Japanese musicians, and a reading by the poet Hugh McFadden.

The event concluded with the Lord Mayor laying a wreath at the base of a memorial cherry tree planted by the Irish CND in 1980, followed by a minute of silence.

Representatives from the embassies of Austria, Egypt, South Africa, Norway, Russia and Mexico also attended, with apologies received from US ambassador to Ireland Kevin O’Malley.