Difference between 1983 and 2018 campaigns was that this time there was no fear, says former Labour TD Kathleen Lynch 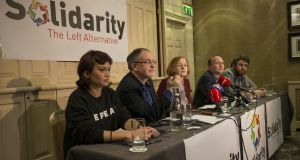 Mick Barry TD (second left), who saw his Cork North Central constituency vote by 64.02 per cent to 35.98 per cent for repeal, said that the result was a clear call for greater equality in Irish society. Photograph: Brenda Fitzsimons

The Government should move ahead quickly and introduce legislation to give effect to the referendum result, while opponents of repealing the Eighth Amendment should note just how emphatic people voted for change according to Solidarity TD, Mick Barry.

Mr Barry, who saw his Cork North Central constituency vote by 64.02 per cent to 35.98 per cent for repeal, said that the result was a clear call for greater equality in Irish society and the government should recognise that by introducing legislation to allow for termination of pregnancies.

“I think the immediate issues now would include putting the legislation through quickly and cleanly and introducing the recommendation for free contraception and also introducing real genuine sex education into all schools,” said Mr Barry.

“The Government need to drive forward and process the legislation quick and introduce the recommendation for free contraception and real genuine sex education into all the school and anyone in the Dáil opposing Repeal should note carefully where public opinion stands on this issue.”

Mr Barry said that he also believed the cervical smear scandal had an impact, reinforcing the view among people that women were yet again being treated as second class citizens by the state and “it added fuel to the Yes fire in that sense”.

Mr Barry said that the other striking feature of the campaign was the involvement of young people and he paid tribute to those who had helped push the issue to the point where establishment parties could no longer ignore it.

“I think it shows that young people are a force in Irish politics and the generation that has been slagged off as the snowflake generation put this on the agenda and forced it to the centre stage of Irish politics through the campaign they waged,” he said.

“The difference this time is that there was no fear and people are saying out loud that they were going vote Yes and people were able to express themselves whereas, back in 1983, frankly, the atmosphere then was horrendous and the intimidation was quite severe,” said Ms Lynch.

“There were only 11 people who voted against it in the Dáil but they were significant national players, people like Alan Shatter and Eileen Desmond and Barry Desmond and Proinsias de Rossa and Michael D Higgins and Mary Robinson and Catherine McGuinness opposed it in the Seanad.

“I was in the Workers Party at the time and I remember we had rocks and bottles of holy water thrown at us and leaflets were given outside my local church, saying we were all baby killers - I wasn’t named on them but there were so few of us, everyone knew who they were referring to.”

Ms Lynch said that the campaign against those who voted against the Eighth Amendment continued long after the referendum to the point that it would be brought up on the doorstep when she was canvassing in local and general elections for some time afterwards.

“Some people say the change began with the marriage equality referendum but it goes way back before that - it started in 1992 when people were asked to vote on the right to travel and right to information - I saw people coming together to vote No to those measures and we won both.

“Somebody said to me today, it must be a great satisfaction to you to know that you were right in 1983 but no, that’s not the case because the pain and suffering that this amendment has caused in this country over the last 35 years shouldn’t give anyone any satisfaction.”