Government facing strikes in run up to election

Education, transport and health sectors could be affected by industrial action 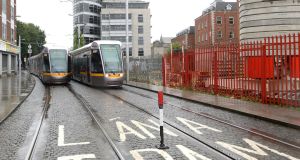 Staff working on the Luas in Dublin are to stage two 48-hour work stoppages next month as part of a campaign for pay increases. Photograph: Cyril Byrne

The country’s institutes of technology will be affected by a one-day strike on February 3rd by about 4,000 lecturers, who are represented by the Teachers’ Union of Ireland (TUI), over casualisation and resource issues.

Separately, about 350 second-level schools could face closure in the weeks ahead as part of a one-day strike also involving members of the TUI. The union’s executive decided last week that this work stoppage would take place on an unspecified date before the election unless its demand for “meaningful talks” on areas of significant concern was met.

The areas of concern identified by the TUI include income poverty for teachers, casualisation, what it described as a collapse of student support systems and greater bureaucracy in the education sector.

Separately, primary school teachers are to ballot for industrial action as part of a dispute over a continued ban on promotion in schools and increasing workloads.

The ballot will ask teachers if they favour stopping all involvement in school self-evaluation.

Meanwhile, Dart drivers represented by the National Bus and Railworkers’ Union and Siptu are to ballot in the coming days for strike action in protest at plans by Iarnród Éireann to introduce a new 10-minute frequency service without agreement.

Staff at Bus Éireann who are members of the National Bus and Railworkers’ Union are also balloting for industrial action amid fears over a forthcoming strategic plan for the Expressway inter-regional coach service being drawn up by the company.

The move forms part of arrangements to facilitate the construction of the new national children’s hospital on the St James’s campus.

Talks on this issues took place last Friday between management at St James’s and trade unions.

“St James’s Hospital is in a process of ongoing consultation with staff unions regarding the proposed introduction of car-parking charges, and related issues, on the hospital campus,” the hospital said in a statement.

“At a meeting management again extended the invitation to unions to participate on the hospital’s mobility working group with a view to contributing to the development of a wider, and informed, mobility plan for the campus. Further engagements are anticipated over the coming weeks.”

It is understood unions wanted management to scrap the existing plans and start again on a new process for dealing with the reduction in parking facilities while construction work on the new children’s hospital is under way.