Gold rush at Dublin Airport on return of our Special Olympians

Team Ireland arrived home from Abu Dhabi with a haul of 85 Olympic medals across 12 sports. 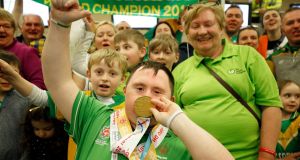 Special Olympian Mark Saddler shows off his bowling medal as he celebrates with his family after arriving home. Photograph: Nick Bradshaw/The Irish Times

Mark Claffey had a definitive view about the time he spent in Abu Dhabi at the Special Olympics World Games when he arrived back at Dublin Airport on Friday afternoon.

“It was really the most incredible experience,” he said.

The 30-year-old golfer from Blackrock, Co Dublin said he was “shocked” to have won a gold medal in the warm weather of the United Arab Emirates.

“I was so happy to win that gold. We’re going to have another party in my house,” he said. “I had great fun over there . . . Abu Dhabi was very good, it was very hot. I had to drink loads and loads of water because you had to be healthy.”

There was a heroes’ welcome for Claffey and the 90 other members of Team Ireland who claimed 86 medals across 12 sports at the games.

There were broad smiles as the athletes – brandishing 30 gold, 29 silver and 27 bronze medals – were welcomed home by hundreds of friends and family members, and a rendition of the Fields of Athenry.

Minister for Sport Shane Ross and Minister of State for Disability Issues Finian McGrath were also on hand to congratulate them.

Claffey’s mother, Breeda, said of the trip: “We went out there with no real expectations of him coming back with any medal because it was against people on the world stage. It was really the most incredible experience, four days of playing nine holes of golf. It was very tight until the very last hole. He was ecstatic and we were ecstatic too. It’s a fantastic achievement by him, we’re delighted.”

Patrick Quinlivan (36), from Letterkenny in Co Donegal, won seven medals (two gold and five silver medals) at the games in gymnastics, more than any other Irish athlete.

“I’m over the moon because I didn’t think I was going to win this many medals. I thought I would win one or two, but I didn’t expect to get them all,” he said. “I think it was all the hard training because I was training every day of the week working in the gymnastics gym, doing Jiu-Jitsu, a bit of pilates and yoga at home.”

“I went out to Abbotstown (sports campus) before they travelled and got to meet them and was just taken aback by their commitment, their unity and how determined they were to do well,” he said.

Matt English, chief executive of Special Olympics Ireland, said “the incredible achievements of our athletes over the last week has resulted in a ripple of pride across the country. The medals, ribbons and personal bests they achieved were beyond all expectations but it was their energy, passion and pride that captured people’s hearts,” he said.

He said Special Olympics Ireland is looking for more volunteers and that its annual collection day is on April 5th.