Giving voice to the short story in ‘a sad, twisted melancholy sort of night’ 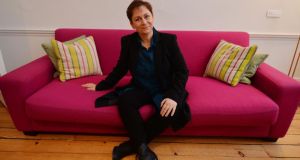 Anne Enright: she invited four short-story writers to perform their work which was animated by song. Photograph: Alan Betson

It is not that subtle, but barometers don’t tend to register the distinct and particular shift in Galway city’s atmospheric pressure on the last Sunday evening of July.

Metaphorical clouds appear to darken and there’s a sense of sulphur in the air as shutters come down on the arts festival and Ballybrit gallops into town.

Whether Kevin Barry knows it or not, he captures some of that apprehension among the audience in St Nicholas’ Collegiate Church on Sunday night as he introduces us to Garda Sgt Tom Brown.

Driving his unmarked Primera car along a sea road, the sergeant is out on a day that has “the ominous feeling of such grey dense Sundays . . . sour with foreboding – as the vapours of paranoia floated in from Killala Bay and the ridgeback line of the Ox Mountains lay prone, like a crouched beast”.

Barry’s Ox Mountain Death Song, published in The New Yorker in October 2012 and here introduced by him as a “short story in 17 chapters”, captivates the congregation as his voice seems to become that of the Garda, filled with a desire to settle old scores and consumed by an addiction to sugar.

With an instinctive sense of the theatrical, the Limerick-born, Sligo-based writer paints a picture of two rival species: the Swiss-roll-eating hunter who “knew the bog roads . . . the recesses of the hills and the turlough hides” and the 29-year-old prey from a gene pool with “occult nous and racy semen”.

Fellow hosts are musical duo Camille O’Sullivan and Feargal Murray, who open the proceedings with a stirring interpretation of Nick Cave’s God is in the House.

The performers had been invited to “animate” the evening by Enright and Laureate for Irish Fiction project manager Jen Coppinger. As Coppinger explains, one of Enright’s priorities as laureate is “giving a voice to the short story”.

One of her first readings in her new role was on a winter’s Sunday afternoon in Galway’s Charlie Byrne’s bookshop, where she gave a snapshot of her new novel The Green Road. By then, GIAF artistic director Paul Fahy had already approached her to see if she would be part of his programme.

Enright invited Kevin Barry, Mary Costello, Colin Barrett and Claire-Louise Bennett to join her for the free event – tickets were snapped up some weeks beforehand.

She then worked with O’Sullivan and Murray on a selection of musical “responses” to the work they would present. As Barry takes his seat, O’Sullivan creeps disarmingly on stage with a set of musical chimes.

“And so your life’s been a success/And you have pleasure in excess/Don’t worry it will all end soon/The Crack of Doom is coming soon,”she sings, as she and Murray explode into their version of The Tiger Lillies’s Crack of Doom.

Her carefully crafted story, of a relationship under pressure, is read with all the deliberation of a man who is telling his wife how he drove through the night with another woman, and who thinks of time “like a small worm crawling across the earth” .

“ To our love let all the jilted lovers cry”– as in Nick Cave’s People Ain’t No Good – is O’Sullivan’s response; and the theme of false love and betrayal carries through the interval to Colin Barrett’s reading of Bait, from his short-story collection Young Skins.

Barrett, from neighbouring Mayo, opens the door gently to his fictional Glanbeigh when, on “another bath of a summer’s night, the moon low and full and hazed at the edges, as if the heat of the long day had thickened the medium of the air”, his characters Matteen and Teddy set out for a spin.

Their pursuit of one small-town beauty, Sarah Digan, in all its restrained savagery, is matched with Tom Waits’s God’s Away on Business.

Clare-Louise Bennett’s poem Postcard and Anne Enright’s story Pale Hands I Loved, Beside the Shalimar make up the latter half of the evening, interspersed with more music, bobs and bells from O’Sullivan’s red case – including a ramped up version of Nina Simone’s I want a little Sugar in my Bowl.

And she creeps offstage with a cock of her hat to her fellow artists.