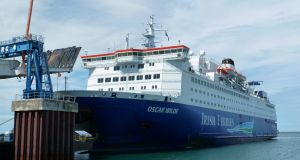 The five people were found in a lorry which travelled from Cherbourg on the Irish Ferries’ vessel ‘Oscar Wilde’ into Rosslare Europort.

Five people, including a three-year-old girl, were found in the back of a lorry in New Ross, Co Wexford at the weekend, according to gardaí.

The girl, three men and a woman, who told immigration officials they were Kurdish, were found in the the lorry at O’Leary International in Marshmeadows. They are all said to be in good health.

Sgt Eddie Wilde said the people with the child, who are all aged in their 20s, were discovered at 6 pm having travelled from Cherbourg on the Irish Ferries Oscar Wilde the previous day into Rosslare Europort.

They are thought to have entered an unaccompanied refrigerated container which was left in Cherbourg.

The contanier was taken from a compound in the port city by a tug on Saturday and deposited on the ferry for the 18-hour journey to Ireland. The container was sealed by custom officials as it contained perishable goods.

Noises from the back of the lorry alerted one of the company’s staff who contacted gardaí.

“They were all in good health but were taken for medical assessment to Wexford General Hospital as a precaution,” said Sgt Wilde.

It is understood members of the group told immigration officers that they had paid €5,000 each to be smuggled into Ireland.

Wexford Chief Superintendent John Roche said the five were taken to New Ross Garda station where they were medically assessed prior to being taken to Wexford Garda station’s immigration unit.

They were processed and interviewed prior to being taken by gardaí to a refugee reception centre in Waterford where they spent the night before travelling to Dublin to apply for asylum seeker status.

“They were all in good health and we made sure they had food and plenty of liquids,” he said.

Sgt Wilde said it was unclear if the five people werea related “as the last names given are not similar”.

Supt Roche said there was an increased garda presence at Rosslare Europort, and numerous people had been found hiding in the back of lorries and trailers and under trailers.

“We search the majority of trucks coming into Rosslare Europort and we have found a lot of people who are sent back to France.”

The increased garda presence is also due to the heightened security threat posed by Islamist terrorism across the continent.

Last June, a cargo of apples valued at €18,500 owned by a Wexford company had to be destroyed after a refugee left a bottle of urine in the back of a trailer entering the country via Rosslare Europort.

Last February nine male refugees were discovered huddled inside the back of a truck in New Ross that had arrived at Rosslare Port. They had been hidden inside the trailer for at least two days.

Supt Roche said as a result of investigations several arrests had been made. He said several people who had false documents had been sent back to their outgoing port from Rosslare Europort.