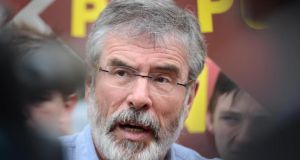 Sinn Féin president Gerry Adams said yesterday that the political process “is in trouble” and faces “its greatest challenge since the Good Friday agreement negotiations in 1998”. Photograph: Dara Mac Dónaill

Sinn Féin and the DUP are again at loggerheads after Gerry Adams yesterday warned that the powersharing Stormont administration is facing its most “serious threat” in recent years.

Mr Adams, in what Sinn Féin described as a “keynote statement”, said the political process “is in trouble” and that it faces “its greatest challenge since the Good Friday agreement negotiations in 1998”.

First Minister Peter Robinson in turn accused the Sinn Féin president of a “self-serving attempt to distract public attention” from budgetary cuts being imposed because of Sinn Féin’s refusal to sign up to British government welfare reform – the issue “most likely to bring down the political institutions”.

Mr Adams’s statement follows a period of serious disagreement between Mr Robinson and Sinn Féin Deputy First Minister Martin McGuinness over issues such as welfare reform, departmental budgets and developing a peace and reconciliation centre at the Maze prison site.

Sinn Féin’s opposition to welfare reform has resulted in effective financial penalties of £78 million (€98 million) being imposed by the British treasury on the Northern Executive with more swingeing cuts threatened.

‘Bad economics’ Yesterday the Alliance Minister for Employment and Learning

, Stephen Farry, announced that because of the cuts further planned development of the University of Ulster Magee campus in Mr McGuinness’s home city of Derry was “off the table” for the “indefinite future”.

Mr Adams was particularly critical of unionist leaders, the British government and Northern Secretary Theresa Villiers, and of the Irish Government. He accused Mr Robinson of “bad manners, bad politics and bad economics”.

Mr Adams defended Sinn Féin’s opposition to welfare change, stating, “These changes are not about reform. They are about cuts and they are part of a Thatcherite agenda designed to dismantle the welfare state. And Sinn Féin will oppose them.”

Mr Robinson said that because of Sinn Féin opposition to welfare reform the Executive faced cuts of £1 billion over the next five years. He said the impasse over welfare reform was the issue “most likely to bring down the political institutions”.