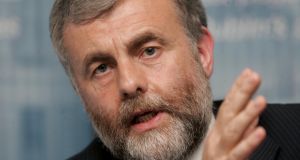 The present German government is pursuing economic policies which allowed the Nazis to come to power in the 1930s, Siptu president Jack O’Connor has said.

Mr O’Connor said the “levers of power in Berlin are still indelibly wedded to the ordoliberal economic model with its attendant ruthless strategy of internal deflation which it is imposing across the continent.”

A similar strategy was pursued by the Weimar Government of German chancellor Heinrich Bruning during the Great Depression when a period of tight fiscal rectitude allowed the Nazis to come to power in 1933, Mr O’Connor suggested.

The Siptu president was speaking at the centenary meeting of the Irish Neutrality League set up in October 1914 to oppose the first World War.

The league was set by James Connolly, Arthur Griffith of Sinn Féin, Countess Markeivicz and Francis Sheehy Skeffington. All the seven signatories of the 1916 Proclamation were supporters though they invoked the support of Germany for the Easter Rising.

Mr O’Connor told a conference in Liberty Hall that “humanity in Ireland, in Europe and globally is now treading in territory which has been uncharted since the 1930s and the historical process which resulted in the great conflagration that the Second World War was to become”.

Mr O’Connor said the pigeons were now “flocking home to roost” in relation to the order books of German manufacturers where there has been a rapid slowdown in the economy as a result of the economic policies pursued throughout Europe by the German Government.

“One cannot be confident that it will evoke the necessary fiscal response to reignite the economies of Europe,” he warned.

Mr O’Connor drew parallels with the pacificist Social Democratic party in Germany which was forced into supporting the war in 1914 though it was the biggest party in Government, and the present day left in Europe.

He maintained the left has to be united given the challenges faced by the world economy.

“I believe that for those of us on the broad left it means immediately drawing a line on sectarian squabbling and addressing the challenge of developing as much unity as possible around an economic and social policy approach which recognises the realities of globalisation and the need to have a strategy to generate wealth as distinct from simply redistributing it,” he said.

“In this latter regard, I urge all who see themselves as being on the left to reflect on the lessons of Germany in the 1930s a period during which bitter sectarian antagonism between the social democrats and the communists opened the way to the ascendancy of the Nazis - and all the more tragic because it was all avoidable.”

Other speakers tonight include Sinn Féin leader Gerry Adams and Mary Carolan of the Sheehy Skeffington School of Human Rights & Social Justice. The event is hosted by the Peace and Neutrality Alliance.