Senior officer’s examination underway for over a month 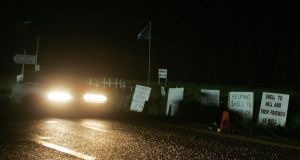 Protest posters outside the entrance site to the Ballinaboy, Co Mayo site in 2006 when Shell were building a processing terminal for the Corrib Gas Field.

An Garda Síochána has appointed a senior officer to examine claims a company contracted to Shell E&P Ireland delivered large quantities of alcohol to Belmullet Garda station in Mayo. The Garda Press Office confirmed to The Irish Times last night that “a superintendent has been appointed to examine the matter”.

It is understood Supt Thomas Murphy of Swinford Garda station has been instructed to contact the contractor, OSSL, in relation to a number of allegations against the force.

The “examination” has been underway for more than a month, and is subsequent to inquiries previously conducted by the gardaí following “allegations” made to the district officer at Belmullet Garda station on December 7th, 2011, that “alcohol was distributed to members of An Garda Síochána on behalf of Shell E&P”.

Inquiries conducted in relation to the December 2011 allegations had “found no evidence of alcohol being distributed to members of An Garda Síochána by, or on behalf of, Shell E&P”, gardaí have said.

The Observer claimed alcohol delivered by a Shell contractor, OSSL, included a drinks consignment worth €35,000 to Belmullet Garda Station in December 2007.

This was six months after one of the most fractious Corrib gas protests at Pollathomas pier, leading to a Garda Ombudsman investigation and recommendation – not acted upon to date – that a senior officer handling the protest be disciplined.