Galway en fete with both arts and fringe festivals

No Macnas parade due to funding differences 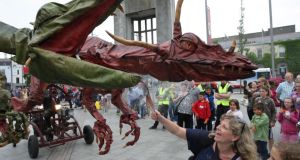 Smoke breathing dragons roaming through Eyre Square in Galway for the opening of the Galway Arts Festival. Dragons is presented by one of Europe’s most exciting outdoor theatre companies, the world famous Sarruga from Barcelona. Photograph: Joe O’Shaughnessy.

Demonic dragons, flying trapeze and trampoline artists and a “dream engine” heliosphere envelope the streets of Galway over the next fortnight as the annual arts and fringe festivals weave their magic.

Author Colum McCann and Gathering chairman Tim O’Connor opened the official arts festival last night, while the fringe, now in its second year, has been running since last Friday.

A South African production of Mies Julie will play for eight performances, while other highlights include the return of Northlight Theatre, Christian O’Reilly’s Sanctuary, staged by the Blue Teapot Theatre Company, and Taibhdhearc na Gaillimhe’s Tom Murphy epic, An Tíoránach Drogallach, directed by Anne McCabe.

Stage musical
Galway Community Theatre and Galway Youth Theatre will combine for Pat McCabe’s stage musical for both children and adults, the Adventures of Shay Mouse.

There is no Macnas parade this year, due to funding differences, but the street theatre company is committed to staging an event in its home city at Halloween. The festival’s outdoor programme includes Spanish Sarruga company’s Dragons from Barcelona and flying trapeze artistes Les Pepones.

The Dream Engine Heliosphere will navigate the city skyline in a helium balloon, and Catalan trampoline master Max Calaf Seve will perform at Spanish Parade.

A “multicolour swirl of movement, costume and light” is promised by the Wrong Size’s Lightwalkers.

The RTÉ Concert Orchestra will perform Galway’s first “night at the Proms” in the festival Big Top. The tent is also venue for Glen Hansard and Damian Dempsey, while music ranges from the Henry Girls, Frankie Gavin and Brian Kennedy to cajun musicians BeauSoleil with Michael Doucet and an Irish/Romanian /Congolese collaboration, Kaleidoscope.

The Galway fringe, directed by Claire Keegan for the second year, also has a programme of theatre, comedy, music, art and children’s events, with NUI Galway’s Cube Theatre providing the venue for some of the drama.

Collaboration
The fringe has booked “From Reels to Ragas”, a collaboration between highly respected Irish percussionist Tommy Hayes and Australian-born self-styled “mongrel” Mattu Noone. Mattu, an ex-indie rocker and performer of the 25-stringed lute called sarode, has studied north Indian classical music and is a founding member of successful Galway group, the Bahh Band.

The fringe’s theatre includes Orion’s Belt Beyond Therapy, a comedy in 1980s North America, Borderline Theatre’s the Woman Who Cooked Her Husband; the Wine Goose Chase in Le Petit Rouge, Dominick Street, and a night of storytelling and improvisation with Moth and Butterfly.

Daily readings, performances and exhibitions are promised in the Claddagh’s Dominican Hall, where the fringe is hosting the Artistic Atlas of Galway – combining poetry, short stories, photography and art work in a reflection of the city’s contours, rivers and streets.

Election fact-check: Is the ‘pensions timebomb’ a myth?