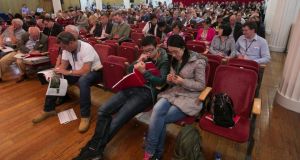 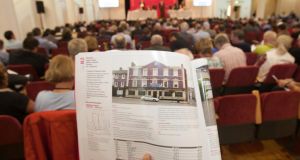 The end was almost as tense as a Kilkenny-Tipp hurling final as the Thurles hotel where the GAA was formed 130 years ago went under the hammer following an extended auction in a packed RDS hall yesterday afternoon.

After a nail-biting 10-minute auction featuring multiple bidders and two last-second interventions, Hayes Hotel was sold for €650,000 to the solicitor who had made the first bid of €450,000. But mystery surrounded the identity of the new owners, as the solicitor made no comment about her client once the sale was complete.

While three bank branches and a 23-unit apartment complex in Malahide were also up for grabs at the Allsop Space auction, much of the attention focused on the small and shabby midlands hotel which would most likely have gone largely unnoticed were it not for its unique place in Irish history.

The once-thriving 30-room hotel in Liberty Square started life as The Star and Garter in the 18th century before being bought and re-christened by Eliza Hayes in the 1870s.

In 1884 its billiard room was where the GAA was set up by Michael Cusack and seven like-minded sporting souls.

In recent years the hotel had morphed into a dancehall and late-night haunt for Tipperary clubbers, but fell on hard times before going into receivership in April last year.

On three separate occasions towards the end of the auction, which was presided over by Allsop Space senior auctioneer Robert Hoban, the solicitor making all the running looked to have secured the property – only to see the prized asset slip from her grasp.

This was topped by the very determined solicitor who in turn saw her €645,000 beaten by €2,500 from the man in the bright shirt. Her final bid of €650,000 secured the property, after which there was a ripple of applause throughout the room. “Well fought, Madam,” Mr Hoban said.

While the price was €150,000 above the reserve, it was still €100,000 less than a guide selling-price which was being quoted by estate agents at the beginning of the year.

At the start of the Allsop Space auction, there were 226 properties listed and, while some were withdrawn over the course of the day, sales were described as “very positive” by Mr Hoban.

Other highlights included the sale of 23 Malahide apartments which went for €4.5 million, while the Ramblers Rest on Church Road in Ballybrack was sold for €590,000.