Funeral Mass celebrates ‘the beauty of Seamus Heaney...in his being’ 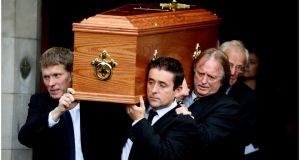 Seamus Heaney’s remains are carried by his sons Michael (left) and Christopher (centre) and their uncle Barry Devlin at the Church of the Sacred Heart Donnybrook. Photograph: Bryan O’Brien

Poet Seamus Heaney’s last words were in a text message to his wife Marie last Friday, minutes before he passed away, his son Michael said yesterday.

“In his favourite Latin they were ‘noli timere’, don’t be afraid,” Michael said. He was speaking at the end of his father’s funeral Mass at the Church of the Sacred Heart in Donnybrook, Dublin. He thanked hospital staff, and all the people for the “extraordinary tributes of the past few days”, following “such devastating loss”.

Earlier, family friend and chief celebrant at the Mass, Msgr Brendan Devlin, spoke of how “that great democrat Seamus Heaney could speak to the king of Sweden, an Oxford don or a south Derry neighbour with the directness of a common and shared humanity”. He also felt “he might have liked his funeral Mass to be celebrated in an Ulster accent”.

In his homily Msgr Devlin, former professor of modern languages at St Patrick’s College, Maynooth, commented that “when we read that series of sharp witted paradoxes that we call the Eight Beatitudes . . . what you might call the Identikit portrait of the ideal Christian, it cannot but strike us how many of them apply readily to our memories of Seamus Heaney”.

Msgr Devlin remembered the poet had recalled “the early stirrings of a poetic imagination as he recited as an altar boy the words of the Litany”.

Both from Ulster, he said that “like many of our generation we had both inherited. . . the imagination and with it the memory of a community”.

What was important were “the prayers that had been said before us for generations, generations whose hard won loyalties were so authentically embodied in the man and so vibrantly expressed in his work”, he said.

At the end of the Mass, poet Paul Muldoon spoke of his arrival at Belfast airport on his way to the funeral where an immigration officer, on establishing who he was, said: “You must be devastated.”

There was “something about the unvarnished, unselfconscious aspect” of the comment that reminded him of a phone call he made to the Heaney household years ago, which Seamus’s then teenage son Michael answered.

They talked, then Michael said, “I suppose you want to speak to Head-The-Ball,” referring to his father. “I was a little taken aback by the familiarity, perhaps even the over-familiarity, of this nomenclature. . . I realise now [as a father himself] that it was a very telling moment. It was a moment that suggested a wonderfully relaxed attitude between father and teenage son, one I now see as highly difficult to establish and maintain,” he said.

The Seamus Heaney who was renowned the world over was “never a man who took himself too seriously” but he had “a signal ability to make each of us feel connected not just to him, but to one another”. As a person “he did everything con brio, with vigour” yet, in describing him, “anything that smacks of ostentation would be quite inappropriate. As would anything that smacks of meanness of spirit. A word that might come to mind is ‘bounteous’.”

Unseemly delight
“Big-hearted” came closer. The word reminded him that “when Seamus was fitted with a monitored electronic device a few years ago he took an almost unseemly delight in announcing, ‘Blessed are the pacemakers’.”

It was “Seamus Heaney’s unparalleled capacity to sweep all of us up in his arms that we’re honouring today”, he said. There was also his other great attribute, he said. “I’m thinking of his beauty. Today we mourn with Marie and the children, as well as the extended families, the nation, the wide world. We remember the beauty of Seamus Heaney – as a bard, and in his being,” he concluded.

Offertory gifts, which included flowers from the garden of the Heaney home in Sandymount, were brought up by grandchildren, Aibhín (5) and Anna Rose (6).

Music was by Liam O’Flynn and Neil Martin. The Mass concluded with Brahms’s Lullaby. As the coffin was carried down the aisle it was accompanied by a low hum from the congregation as they spontaneously sang along with piper Liam O’Flynn’s rendition of the old Irish lament Mo Ghile Mear.