Thousands have attended the State commemoration for the centenary of the funeral of Jeremiah O’Donovan Rossa in Glasnevin Cemetery. The funeral and Padraig Pearse’s oration was a pivotal event leading up to the 1916 rising. Video: Bryan O'Brien 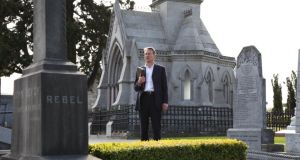 Former Tory cabinet minister Michael Portillo, pictured at Glasnevin Cemetery, is to make a documentary about the Easter Rising for RTÉ. 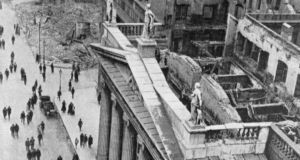 Former Tory cabinet minister Michael Portillo is to make a documentary about the Easter Rising for RTÉ.

The Enemy Files will tell the story of 1916 from a British point of view. It will take as its premise that history is written by the victors.

Portillo will seek to redress the balance by the telling the story of the Rising from the perspective of the ultimate loser.

Portillo has already made a radio series about 1913, the year before the first World War broke out, which contains a chapter on the Irish crisis at the time.

In it he points out that the original rebels were unionists not nationalists.

He has also made part of his successful series of Great Railway Journeys in Ireland. Portillo’s documentary is one of a series of programmes surrounding the 1916 Rising. The most significant will be Rebellion, a five part drama series, which is likely to be broadcast in January.

Producer Catherine Magee said they were eschewing the “great man view of 1916” for one in which different characters see the rebellion as it unfolds.

Rebellion received “amazing access” to such historic buildings as the GPO, Dublin Castle, Kilmainham Jail and the roof of City Hall, she added.

Many of the leaders of the rebellion, most notably Pádraig Pearse, James Connolly and Countess Markievicz will feature but not in major roles.

Along with Rebellion, the major RTÉ production will be the three part series 1916 which is mostly funded by the University of Notre Dame.

Set to be the one of the most expensive documentaries in Irish television history, the series will take an international perspective on the Rising. It will be narrated by Liam Neeson.

In Ireland’s Rising, a four part series, four household names will travel back to their homesteads to discover what particular connection their county has with the events of 1916 and find out what the people of their county are planning to commemorate it.

In the documentary Children of the Revolution, Joe Duffy will broadcast a series on the 40 children killed during the Easter Rising. He has also written a book on the same subject which will be published shortly.

Bob Geldof will write and present a documentary on WB Yeats which will also have a strong dimension about the 1916 Rising.

A co-production with BBC, it is written by Geldof in collaboration with historian and Yeats scholar Roy Foster.

All of the programmes surrounding the Rising are likely to be broadcast early in the New Year.