Sean Cromien came from humble origins to become Secretary to the Dept. of Finance 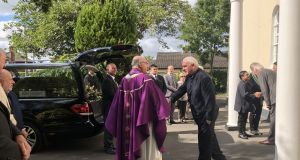 Bertie Ahern speaks to Parish Priest Fr Liam Ó Cuív at St Brigid’s Church in Killester. The former taoiseach was among mourners at the funeral of former Secretary to the Department of Finance Sean Cromien. Photograph: The Irish Times

The former Secretary to the Department of Finance Sean Cromien was described at his funeral as a very “ordinary” man from a humble background who rose to become the top civil servant in the State.

Mr Cromien died aged 89 on Tuesday. He held the position of secretary between 1987 and 1993 at a tempestuous time when the punt was devalued and interest rates were to rise to 16 per cent.

Former taoiseach Bertie Ahern and former ministers Michael Woods and Nora Owen were among those who attended the funeral at St Brigid’s Church in Killester.

Parish priest Fr Liam Ó Cuív said Mr Cromien had come from a “modest beginning” but he had used his talents to “serve his country, his community and his family and friends”.

Along with being a civil servant, he had served the Archdiocese of Dublin sitting on its finance committee.

Mr Cromien’s great passion in life outside work was bird-watching, mourners were told. Tom Kilbane said he and Mr Cromien shared a passion for rare birds and he would push Mr Cromien “beyond his natural limits in the pursuit of these” to the extent that both men were arrested in Ceausescu’s Romania in 1981 for pointing a telescope at a guarded power plant.

Mr Kilbane concluded that by stating he would go with his “mother’s typical Irish assessment that having regard to all his (Mr Cromien’s) achievements, he was really very ordinary”.

He also read tributes from other friends of Mr Cromien. Joe Patterson, one of his oldest friends, recalled that Mr Cromiem was the son of a cooper in Stoneybatter and his father wanted him to become a cooper too, but he had been a brilliant student at St Paul’s CBS in North Brunswick Street, known as the Brunner.

He had to do his Leaving Certificate twice as he was deemed to be too young the first time to go to university. He also had to work full-time during his university years as his father retired through ill-health. Mr Cromien suffered from ill health himself, but still managed to get a first class degree.

Another friend, Jim Fitzharris recalled that Mr Cromien had a taste for exotic cars, especially a Triumph Stag, but it broke his heart because of its unreliability.

He said Mr Cromien will be best remembered for his personal qualities. “He was unfailingly polite, courteous and affable” and wore his status as the most senior public servant in the country very lightly.

“He never mentioned his occupational roles in a boastful or patronising manner - indeed he rarely mentioned them at all except to those whom he knew well and even then, only as a pretext for a good discussion on the topic at hand,” he said.

Mr Cromien was buried in Glasnevin Cemetery after funeral mass.