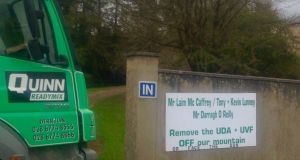 The sign at Quinn Industrial Holdings read: ‘Remove the UDA + UVF off our mountain or face the gun.’

The management of the former Quinn Group, which operates in Co Cavan and Co Fermanagh, has faced a death threat in a major escalation in a months- long campaign of intimidation.

A sign displaying the message was erected near Quinn Industrial Holdings Limited in Derrylin and read: “Remove the UDA + UVF off our mountain, or face the gun.”

Condemning the action, a company spokesman said it was an attempt to “intimidate an entire community and local workforce and undermine businesses that continue to invest in sustaining and growing employment”.

“Neither Quinn Industrial Holdings Limited nor the local community will be intimidated by this self-serving bullying and criminal activity,” he said.

“None of this ever happened in the almost four decades that Seán Quinn was in charge and it is a great disappointment that the community, staff and the Quinn family are being subjected to what is an intolerable situation,” Ms Gilheany said.

“It is our hope that a resolution to the current impasse can be arrived at, whereby a commitment given that the company would be returned to the Quinn family, will be honoured,” she said.

Pádraig Murphy, a Unite union representative has warned the intimidation and threatening notices “threaten employment security of all”.

“These latest signs and notices should be a red flag to everyone in our community.

“No one should have to live under the fear of death threats. It is a fundamental human right to live free of intimidation. These activities have to stop,” Mr Murphy said.

“Intimidation and off-putting signs do nothing for our county; they only cast a shadow over jobs and investment,” he added.

“Unite is reiterating our offer to mediate between the various parties with the aim of securing our members’ jobs.

Gardaí and the PSNI have spent months investigating the threats, acts of sabotage and vandalism.

The Department of Justice told The Irish Times: “Any attempts to intimidate workers or interfere with commercial enterprises must be regarded with the utmost seriousness.”