Foetal abnormality no basis for abortion in Northern Ireland 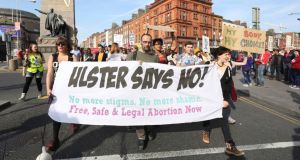 Some of the pro-choice campaigners who marched from the Garden of Remembrance to Merrion Square last month in Dublin.

Under current abortion legislation in Northern Ireland, foetal abnormality is not recognised as a ground for abortion in itself, although if it were found to constitute a serious threat to the physical or mental health of the woman it would be.

The 1967 British abortion Act does not apply in the North but abortion is legal in Northern Ireland where “it is necessary to preserve the life of the woman or there is a risk of real and serious adverse effect on her physical or mental health, which is either long term or permanent”.

Guidelines
“In any other circumstances it would be unlawful to perform such an operation,” according to guidelines from the North’s Department of Health. The guidelines are currently being reviewed.

The laws covering abortion in Northern Ireland are the 1861 Offences against the Person Act, and the Criminal Justice act from 1945.

Rape is not referred to in the guidelines. But in cases of rape, abortion would be permitted if it were found to constitute a serious physical or mental threat to the woman. Anyone who unlawfully performs an abortion is liable to criminal prosecution with a maximum penalty of life in prison.

A person who is a “secondary party” to such a termination faces the same penalty.

The guidelines say that while there is no legal right to refuse to take part in a lawful abortion, no one should compel staff who have a conscientious objection to abortion to take part in a termination. Where a doctor has a conscientious objection to abortion, he or she should make arrangements where the woman can be referred to another colleague.

The most recent figures show there were 44 legal abortions in Northern Ireland in 2008-09, 36 in 2009-10 and 43 in 2010-11. More than 1,000 women from Northern Ireland travel each year to Britain for abortions that would not be permitted under Northern legislation.