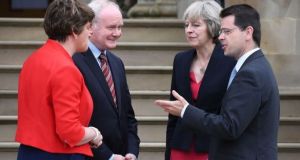 A number of rail lines may be forced to close as Iarnród Éireann is threatened with insolvency, a confidential report has warned.

The report, seen by The Irish Times, shows the country’s rail infrastructure has deteriorated to such a degree due to funding shortages that there are now increased safety risks. It says in the absence of any additional Government funding, large chunks of the rail network will have to close to eliminate the funding gap, leaving only the Dart, Dublin and Cork commuter routes and inter-city services from Dublin to Cork, Belfast and Limerick.

2. French officials begin evacuation of Calais ‘Jungle’
Authorities have begun what may be the largest mass evacuation in France since the second World War in what aid workers predict will be the futile demolition of the migrant camp known as the Calais “Jungle”.

The evacuation began at dawn and the government has deployed 1,250 police, in addition to the 2,100 police and gendarmes already in Calais, 40 agents from the French office for immigration and integration and a dozen translators

Sixty coaches will depart Calais on Monday; 45 each day thereafter, until the camp is empty. The entire operation is expected to take between 10 days and two weeks. 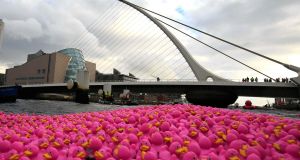 3. Midwifery experts recruited post-Savita have resigned
Two senior experts in midwifery recruited to improve maternity services in the west after the death of Savita Halappanavar have resigned only two years after taking up the jobs.

Group director of midwifery Dawn Johnston is leaving her position with Saolta University Hospital Group, two years after coming from Britain’s National Health Service to take up the position.

4. Theresa May to offer Arlene Foster and Martin McGuinness role in Brexit talks
British prime minister Theresa May will today offer the leaders of Northern Ireland, Scotland and Wales a formal role in shaping Britain’s strategy for leaving the European Union.

At a meeting in London with the leaders of the three devolved administrations will propose a new forum chaired by Brexit secretary David Davis.

Ms May said the Joint Ministerial Committee (EU Negotiations) would give Northern Ireland, Scotland and Wales an official channel to influence Brexit negotiations before they start next spring.

Four die over weekend following road incidents
A 13-year-old boy was one of three people who were killed in crashes in the Republic over the weekend, while an 11-year-old boy, who was involved in a collision in Navan, Co Meath, a week ago, died in hospital on Sunday.
Gardaí in Blanchardstown are also investigating a fatal collision that occurred on Saturday evening, involving two motorbikes.
The crash happened at about 6.50pm on Hartstown Road and one man in his early 20s was taken to Connolly Hospital where he died a short time later.
The second motorcyclist, again a man in his early 20s, was uninjured in the collision.
In Limerick, a man in his 30s was fatally injured when the motorcycle he was driving crashed into a wall at Ballinaclough, Pallasgreen, on Sunday afternoon.

The global rugby family came together for Anthony Foley’s hauntingly moving funeral last Friday and the European game continued to honour the iconic Munster and Irish “8” in fitting and touching manner at every Champions and Challenge Cup games, none more so, of course, than at Thomond Park.On this Monday morning, rugby can hold its head high, writes Gerry Thornley.