Fishing industry ‘will not lose out’ to farmers in Brexit talks 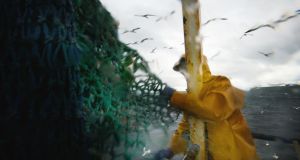 Ireland and Britain share about 40 stocks, and Britain is a key market for Irish seafood. Photograph: Chris Furlong/Getty Images

Minister for Agriculture, Food and the Marine Michael Creed has said the fishing industry will not lose out at the expense of the farming sector in any dialogue with the EU on Britain’s exit.

“A lot is pinned on the potential of the marine sector, so I am not going to shop one in favour of the other,”he said, speaking to The Irish Times in Galway on Friday.

Ireland and Britain share about 40 stocks, and Britain is a key market for Irish seafood.

There are fears within the industry about reduced access and further quota cuts as part of a post-Brexit deal handled by the European Commission.

Fishing vessel owners attending the annual SeaFest in Galway warned that there should be no repeat of Ireland’s approach during EU accession in 1973 when access to Irish waters outside the 12-mile limit was granted in return for concessions to agriculture.

Several skippers recalled how the then Bord Iascaigh Mhara chief executive Brendan O’Kelly was sent home from Brussels after he had tried to warn Irish negotiators about the impact of such a deal.

Mr Creed said he had spoken to “various constituents” during his time at Bord Iascaigh Mhara (BIM) and Marine Institute conferences associated with SeaFest in Galway over the past two days.

He said he was aware that many stakeholders in the fishing industry had an “historical perception that wrong was done at the original EU accession” .

“They are very anxious to ensure that everything was done now to inform and prepare . . . the Government’s position on Brexit,”he said.

He said that a dedicated unit to address the impact of the UK leaving the EU was already working within his department, and “this will involve consultation”.

“However, until Britain triggers the exit mechanism and lays its cards on the table, we can’t react,”he said.

“This is a rolling ball, and we are listening to the industry,” he said. Agencies under his remit including Bord Bia and BIM had already been in contact with clients relating to the currency fluctuations in the aftermath of the British referendum, he said.

“And in relation to sterling, we have been in this space before,” he added.

The Marine Institute will chair the new development team, which will make recommendations to the cross-departmental marine co-ordination group, he said.

The Government was committed to the Harnessing our Ocean Wealth strategy, initiated by his predecessor, Simon Coveney, which aims to double the value of the blue economy by 2030 and deliver 29,000 additional jobs, he said.