First shots of 1916 Rising in west marked in Athenry 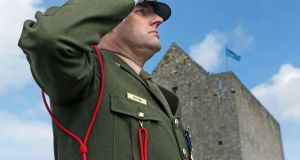 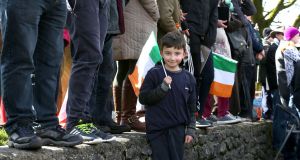 The first shots were not fired in the west until Easter Tuesday, but the role played by Galway rebels who held the largest territory outside of Dublin was recalled at Easter Monday’s 1916 centenary at Athenry Castle.

Minister for Education Jan O’Sullivan led the wreath-laying ceremony- timed to coincide with similar State events in Dublin, Cork, Ashbourne, Co Meath, and Enniscorthy, Co Wexford – marking the start of the Rising in 1916.

Athenry tidy town volunteers had laboured over the weekend to prepare the venue, which was focal point for the insurrection based around Clarenbridge, Oranmore and the Department of Agriculture’s “model farm” – now the Teagasc campus.

Up to 700 Irish Volunteers were “poorly armed” with as many hayforks and pikes among the rifles, revolvers and shotguns, but the county never surrendered, and 38-year-old Constable Patrick Whelan of Eglinton Street barracks was the sole fatality.

When the HMS Laburnum began firing from Galway Bay, leader Liam Mellows led a retreat to Moyode Castle – with eventual disbandment at Limepark at the end of the week.

James Ward, grandson of Mellows’s driver of the same name, was among relatives at the event, as was Patrick Howley, son of Peter Howley of Limepark.

Although fences, security and large screen relay equipment hampered the actual view, the good-humoured crowd gave one of the loudest cheers for uilleann piper Ger Fahy, who played the haunting Gealadh an Lae (New Dawn).

Commdt Frank Flannery read the Proclamation, and Cpl Joseph Hession played the Piper’s Lament , followed by the Last Post with Sgt Michael McLoughlin and Sgt David Colgan and the raising of the Tricolour by Lt Seamus Shannon.

The national anthem was played by St Patrick’s Brass band, and there were some gasps and laughs when one sole plane marked the Air Corps “fly-past”.

Galway teacher Deirbhile Ní Bhrolcháin, one of the programme’s guests, brought a piece of a Mauser gun from the original Asgard. The weapon was one of two kept by her grandfather, Pádraig Ó Brolcháín, who cycled to Howth to help with the landing. His wife Máire Ní Chillín had once taught Irish to Maud Gonne.

Mr Ó Cuaig had organised a commemorative cycle from Ros Muc to Liam Mellows’s headquarters in the east Galway village of Killeeneen at the weekend - marking a bike dash by Ó Gaora in 1916.

Mr MacLochlainn, who read the Proclamation on air, is principal of Scoil Sailearna in Indreabhán, where an art installation by Dara McGee currently depicts seven life-size depictions of the Proclamation signatories. Local builder Liam O’Doherty provided the materials, and the exhibition will remain in situ for some weeks.

A new interpretative centre, Culturlann Chonamara, is being built by State agencies close to the Pearse cottage at an Aill Mhór, which he acquired in 1909 and last visited in 1915.