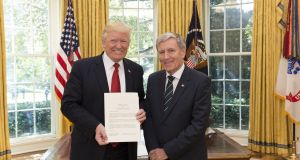 US president Donald Trump with the new Irish ambassador to the US, Dan Mulhall.

Dan Mulhall has been officially installed as the new Irish Ambassador to the United States during a visit to the White House.

Mr Mulhall presented his credentials to President Donald Trump during a short meeting in the Oval Office on Friday.

He succeeds Anne Anderson, who retired from the foreign service earlier this year.

Mr Mulhall arrives from London, where he was ambassador for four years. His previous postings include Germany, Malaysia and Belgium.

The two men discussed a range of topics, including immigration issues and the bilateral economic relationship between the US and Ireland. The annual St Patrick’ Day celebrations in Washington were also discussed.

Mr Mulhall arrives at a challenging time for US-Irish relations. Mr Trump has overseen a crackdown on immigration, which could impact the thousands of undocumented Irish people living in the US.

He has also name-checked Ireland while pledging to reform the tax system.

The Irish Government’s envoy to the US, John Deasy, is also in Washington DC this week, meeting senior figures in the House and Senate.