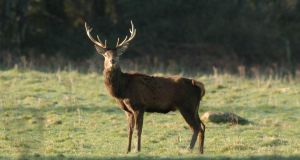 Organised deer walks took place yesterday around Killarney, Co Kerry, where at least one red deer stag has died during this year’s rutting or mating season.

The walks, organised by the Kerry Deer Society, have been taking place over the past number of weeks, during daylight and darkness, to hear the roaring and watch the fighting stags – Ireland’s oldest herd of red deer. The walks are now so popular that numbers are being restricted to minimise disturbance to the deer.

This year’s battle between mature stags is more intense than ever, partly because they are in such fine condition, according to the chairman of the Kerry Deer Society, Noel Grimes.

The animals, which have been in Ireland since the Ice Age, reach up to 150cm in height and weigh a massive 190kg.

The battle for the hinds – or females – among competing males is particularly ferocious this year. A mature stag with a 16-point antler was gored to death near St Mary’s Cathedral in Killarney a week ago.

Gored
A member of the public discovered the dead stag in the Demesne area of the national park alongside the town, wildlife rangers have confirmed. It had been gored in the chest and retreated into the woodland to die after its clash with an opponent.

The fine summer and good feeding means the stags are in fine fettle this autumn and are up for the fight, Mr Grimes said.