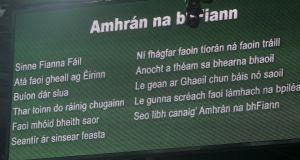 The words of Amhrán na bhFiann are displayed on a screen at Croke Park. Photograph: Dara Mac Dónaill

The words “Fianna Fáil” will not be removed from the first line of the national anthem, although a small number of submissions requesting the change have been received by a Seanad committee.

The Seanad public consultations committee will meet on Tuesday to hear from the Minister for Finance, the Defence Forces, the Lord Mayor of Cork, schools, experts on copyright and members of the deaf community.

The committee has already received about 100 submissions from the public on the issue, which is being considered because copyright in the original song lapsed in 2013, 70 years after the death of its author, Peadar Kearney.

Fianna Fáil Senator Mark Daly said only a couple of the submissions received related to removing the words “Fianna Fáil”, and that polling indicated that more than 80 per cent of Irish people did not want to see the anthem changed in any way.

Other submissions related to the use of Ireland’s Call at sporting occassions, but this was not an issue in which the State had any role to play.

“Over the past number of weeks, there has been a public consultation on the use of, and guidelines surrounding, Amhrán na bhFiann,” Senator Daly said. The issue is complicated by the fact that the State’s copyright in the anthem prior to 2013 related to Kearney’s English language version, The Soldier’s Song, rather than the now more familiar Irish version by Liam Ó Rinn.

Prof Eoin O’Dell of Trinity College Dublin says it is unlikely de Valera got the party name from the song, but that the phrase would have been known in the Irish political milieu of the time. It was only from the 1930s onwards, when Amhrán na bhFiann became a part of the preamble to every GAA match in the country, that the Irish language lyric became the more popular.

From time to time in the decades since, there have been suggestions that the words should be changed, either because of their militaristic tone or because they were believed to give an advantage to one political party.

It has been pointed out that “Sinne Fianna Fáil” is not a literal translation of “Soldiers are we” in the English version.

Senator Daly had expressed concern last year following the use by former Kerry footballer Paul Galvin of words from the English version of the anthem in ads for his Vanguard fashion line for Dunnes Stores.

While the Senator called then for the State to assert copyright in the song, the Senate committee will now consider three options: to maintain the status quo; to follow the Candian model of recognising the official position of the anthem; or to cement that position with guidelines on appropriate use of the song and protections against inappropriate commercial exploitation.

The third option forms the basis of a draft Bill on the issue drawn up by Prof O’Dell, who will present his proposals to the committee tomorrow.

The professor, one of the country’s foremost experts on copyright law, told The Irish Times that Senator Daly’s original proposals were not the correct way to safeguard the anthem, as copyright existed to protect the rights of content creators and encourage innovation.

With tongue somewhat in cheek, he described the involvement of Mr Galvin, Senator Daly and himself as “an argument between three Kerrymen” and said his Bill was “very much a first draft for discussion”.

Other issues likely to be discussed at Tuesday’s meeting include recognition of an Irish sign language version of the anthem.